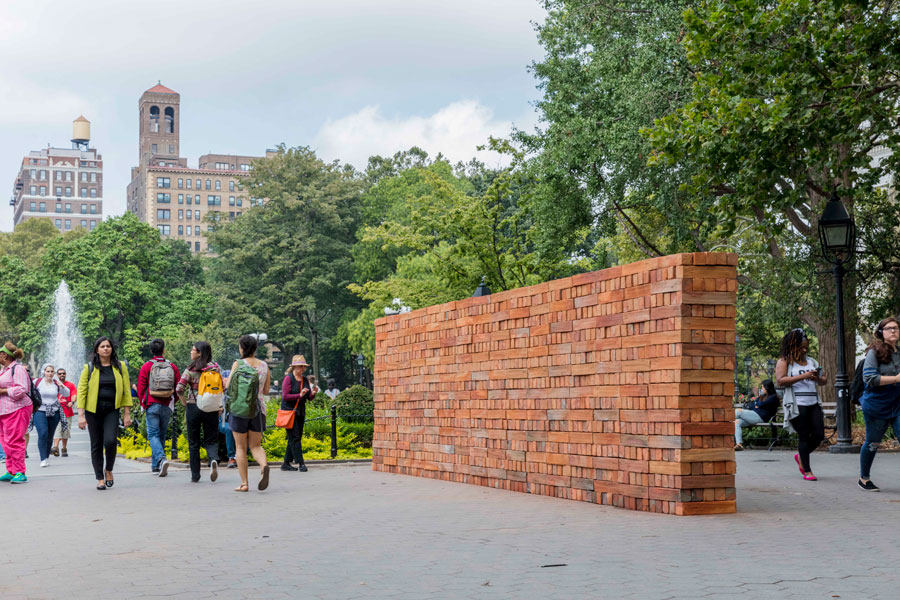 USF Contemporary Art Museum, part of the Institute for Research in Art in the College of The Arts, is pleased to present the work of four international artists who strive to make the invisible visible. In Plato’s The Republic, the character Glaucon tells the tale of Gyge’s Ring: the mythical band rendered the wearer invisible, enabling him or her to perform any act without fear of being known or discovered. Today, anyone with an Internet connection can become invisible. While the behavior of Russian hackers and Internet trolls supports Glaucon’s assessment that the desire for invisibility is in part a longing for unaccountability, there is, historically speaking, another far more common way to become invisible. That disappearing act is the result of economic powerlessness, social disenfranchisement and political expediency.

The four artists in The Visible Turn: Contemporary Artists Confront Political Invisibility speak to the disenfranchisement of people and ideas that have crucially been omitted from today’s social, political, economic and cultural life through four major works. These are Jorge Tacla’s monumental twenty-six foot “portrait” of the Syrian city of Homs in ruins; Karolina Sobecka’s exploration of the dark reality of climate change through the reconstruction of a trio of historical clouds; the raising of Bosco Sodi’s Muro, a wall constructed of clay bricks made by Mexican migrants that is dismantled by museum visitors; and Tavares Strachan’s installation, 130,000 Years, which consists of an 18-channel video work and wall-mounted, collaged entries, each of which reference his Encyclopedia of Invisibility, a massive, 2000-page encyclopedia of invisible persons, places, groups, and things.

If the rise of identity politics in the 1970s and 80s championed certain marginalized identities and concepts in order to render them visible, various global forces today seek to actively reverse those advances—as evidenced by, among other phenomena, climate-change denial, the rise of anti-immigrant nationalism, increased political polarization, and the popularization of so-called “alternative facts.” Besides giving voice to the conspicuously inconspicuous, the artists in The Visible Turn also materialize Marcel Duchamp’s creative dictum—artmaking is making the invisible visible. By Duchamp´s logic, invisibility is impotence. What is powerful is to be seen.

The Stanton Storer Embrace the Arts Foundation is the major supporter of The Visible Turn: Contemporary Artists Confront Political Invisibility. Bosco Sodi’s Muro is sponsored by The Gobioff Foundation and USF World. The opening night artist conversation is made possible by the generous support of Dr. Allen Root in honor of his late wife Janet G. Root. Film screening sponsored by CAM Club.

All events are free and open to the public.
Visit http://cam.usf.edu/events.html for more information.

Art Thursday: Film on the Lawn
February 28, 6-8pm
Pack a picnic, bring a lawn chair or blanket for a free outdoor movie screening of Cloudspotting. This documentary brings to life Gavin Pretor-Pinney’s “The Cloudspotters Guide”, which draws on science, meteorology and mythology for a journey through the world of clouds. Presented by CAM Club.