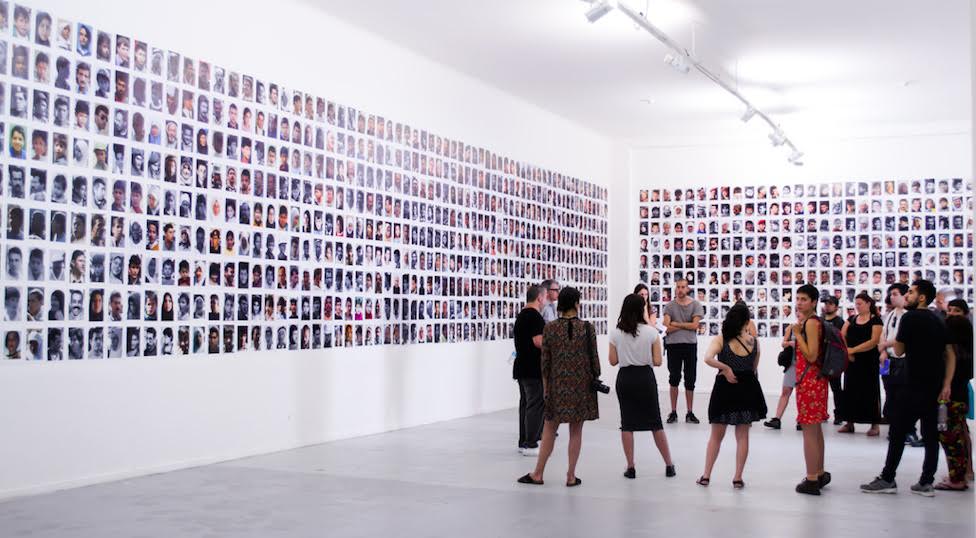 For three decades, Miki Kratsman has been one of the leading chroniclers of life in the Israeli-occupied territories. His photographs—many of them documentary images taken during a previous life as a press photographer for the Israeli newspapers Hadashot and Haaretz—uncover personal stories while revealing the violent, often detached nature of Israel’s military occupation of the West Bank and Gaza.

While trying to answer the question “What happened to the people in the photographs?,” Kratsman amassed a vast archive of more than 9,000 portraits of anonymous Palestinians, which he first uploaded onto a dedicated Facebook page in 2011. The USFCAM installation materializes the artist’s growing portrait archive together with identifying commentary that, in some cases, serves as a literal proof of life—or death. People I Met raises questions about the culture of representation and continues the museum’s tradition of presenting challenging artwork with social content.

The exhibition also includes works from several other contemporaneous projects. These include photographic selections from Kratsman’s Bedouin Archive and his Displaced series, and table-top “panoramas” of “unrecognized” Arab villages the Israeli government has slated for demolition. The 2017 video titled 70 Meters… White T-shirt condenses a year of shooting in the Palestinian village of Nabi Sahli.

Miki Kratsman was born in 1959 in Argentina and immigrated to Israel in 1971. From 1993 to 2012 his photographs appeared regularly in the newspaper Haaretz. From 2006 to 2014 he served as Director of the Photography Department of Bezalel Academy of Arts, Jerusalem, where he continues to teach and lecture. Kratsman is the fifth recipient of the Robert Gardner Fellowship in Photography, awarded by Harvard University’s Peabody Museum of Archeology and Ethnology. He is also the 2011 winner of the Emet Prize for Science, Art and Culture. His work has been exhibited in, among other major international exhibitions, the 2003 Venice Biennale and the 2006 Sao Paulo Biennial. Since 2004, he has been the Chairman of the Board of Breaking the Silence, an organization of veteran Israeli combatants that collects testimonies from soldiers about their service in the occupied territories.