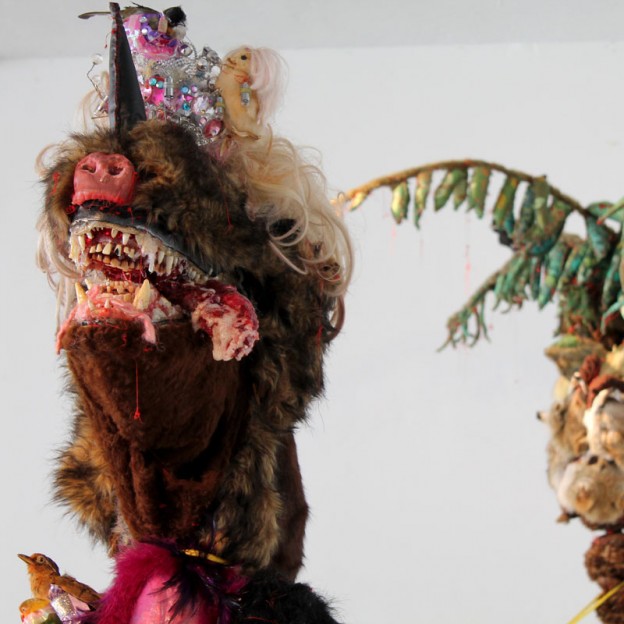 Ringling Underground captivates audiences with contemporary music and art of Sarasota’s up-and-coming Millennials, engaging the community with both the prodigious art of the Ringling museum and the innovativeness of local artists.

“The October Ringling Underground features four contemporary artists who work in both two- and three-dimensional mediums. Artists Kelly Boehmer, Jennifer Lauren Smith, Janett Pulido, and Brian Joseph exhibit art which visually recreates both apocryphal stories and axioms alike. Using mediums such as soft sculpture and videography, the artists create uniquely universal visions that look both to the past and to the future.”
– Natalya Swanson, Ringling Underground Artist Liaison

“Ringling Underground uses music and visual art to engage a younger audience who represent the next generation of Museum members and patrons.”
– Steven High, Executive Director of The Ringing.

“The sculptures have a childlike appearance that is both pitiful and fantastical. Seductive colors and sensual textures are juxtaposed with repulsive and gory elements such as guts, puke, and piss. Kitsch components are incorporated with sincerity and are used to celebrate excess and chaos. All of my pieces are sewn by hand with an aggressive, unrefined stitch. I reuse my materials by cutting up my old sculptures to make new work.”
– Kelly Boehmer, 2014

Kelly Boehmer creates hand-sewn soft sculpture installations. She has exhibited and performed her work nationally and internationally including shows in Baltimore, Dallas, Miami, New York City, New Orleans, Pittsburgh, San Juan, and Sarajevo, Bosnia. She teaches at Florida State University, Chipola College, Tallahassee Community College, and Lemoyne Center for the Visual Arts. Kelly is a member of the performance art group, Glitter Chariot. She received her BFA in Studio Art at the Maryland Institute College of Art and her MFA in Studio Art at the University of South Florida.

“I stage visual manifestations of sound.

I often install my work in unexpected circumstances as a way of perpetuating the notion that art can have a profound impact when encountered by chance, mirroring the magic and intensity of the gestalts we experience in nature and the everyday world. My background in sculpture has instilled a tendency to handle my videos and performance works as objects; I plan all aspects of the visual and spatial experience from the perspective of the viewer’s physicality.”
– Jennifer Lauren Smith, 2014

Jennifer Lauren Smith (b. 1979, Portland, ME) is a visual artist working in sculpture and lens-based mediums. Her work explores visual manifestations of sound, often by utilizing cinematic frameworks to stage performances and time-based installations.

Smith received her BA from Reed College in Portland, OR and her MFA in Sculpture + Extended Media from Virginia Commonwealth University in Richmond, VA. She has received numerous awards including a Vikki Katen Memorial Fellowship, a Wynn Newhouse Grant, a John Ringling Towers Grant, and a Toby Devan Lewis Award. She has shown her work in galleries and film festivals in the US and abroad including Dorsch Gallery (Miami, FL), Pierogi Boiler (Brooklyn, NY), Reynolds Gallery (Richmond, VA), The Façade Film Festival (Plovdiv, Bulgaria), Skulpturenmuseum Glaskasten, (Marl, Germany) and the Crown Heights Film Festival (Brooklyn, NY), and has participated in residencies at Seven Below Arts Initiative (Burlington, VT), Kimmel Harding Nelson Center for the Arts (Nebraska City, NE), The Hermitage Artist Retreat (Englewood, FL), and Binghamton University’s Department of Cinema (Vestal, NY). She is currently a Fellow in the UnionDocs Collaborative Studio Program in Brooklyn, NY.

“My work relate to those ideas and create realities that split in order to symbolize the way we struggle when being in limbo both mentally and physically. I Juxtapose construction components like wood and metal with paint including, but not limited to resin, wire, paper, and canvas to create environments that imitate these multiple realities that are driven unto the surface. By manipulating materials to play a different role from what was initially intended, I push them  outside of their common physical attributes and create playful environments that bring up questions as to the duality of things and how combined elements create a whole new set of facts.”
– Janett Pulido, 2014

Janett Pulido Zizumbo is a Mexican-American fine artist whose artwork revolves around the notion of perception and how visual perception skews the mind of the viewer. She explores religious and scientific concepts that play a part in the perception of the in between. She uses concepts like purgatory in her everyday life, where she feels in constant limbo and grinds to make decisions at every moment.

She often employs unconventional materials when painting, that range from plaster, resin, wire, paper to styrofoam and wood. Her practice has been described as an “exploration of physicality” in her experimentations with different textures and planes that often re-evaluate and expand the limits and boundaries of painting.

Pulido has received numerous awards and grants. She has received Las Damas Fellowship and the Josephina Ferran Scholarship for Latina women artists and has received several travel grants for her research in Islamic theology and Art in Istanbul, Turkey.

“I am inspired heavily by the patterns in Middle Eastern architecture, textiles and rugs. I try to use my paint like making a zen garden by being present in every step. This body of work is made out of oil paint or egg emulsion paint mounted on gessoed masonite board. I  use glazes to achieve lighting, texture and color. Drawing has been a big part of my creative process so I use it for laying out the main composition. This particular body of work is not so much for commercial intent. I created it as an act of self improvement to increase focus, patience and overall technique.”
– Brian Joseph, 2014

Brian Joseph was born in the Philippines in 1987 and relocated to America as a baby. He was always creative growing up, with interests in drawing and arts-and-crafts. His family of fellow creators supported him in his creative pursuits, but his artistic journey was mostly self taught with many influences. Joseph has always had a love for the surreal and people who “beat to a different drum.” During elementary school he was obsessed with M.C. Escher, and in middle school Dali and Picasso haunted his imagination. In high school, he found himself immersed in the works of Georgia O’Keeffe, Albrecht Durer, and Alex Gray. Joseph’s artistic career began as he started designing album art for local bands and national acts. He was fascinated by fantastic realists, such as Mati Klarwein, Ernst Fuchs, and Robert Venosa, who greatly influenced his favorite album designs.

Joseph is continually researching art history and finds himself immersed with new techniques, philosophies, and approaches. His interests lie in playing musical instruments, and, although he has worked in other two-dimensional mediums for years, he did not begin painting in oil until 2013, at which time he started and “hasn’t looked back.”

The evening’s bands include: ALEXANDER & THE GRAPES, PERMANENT MAKEUP, and DIEALPS!