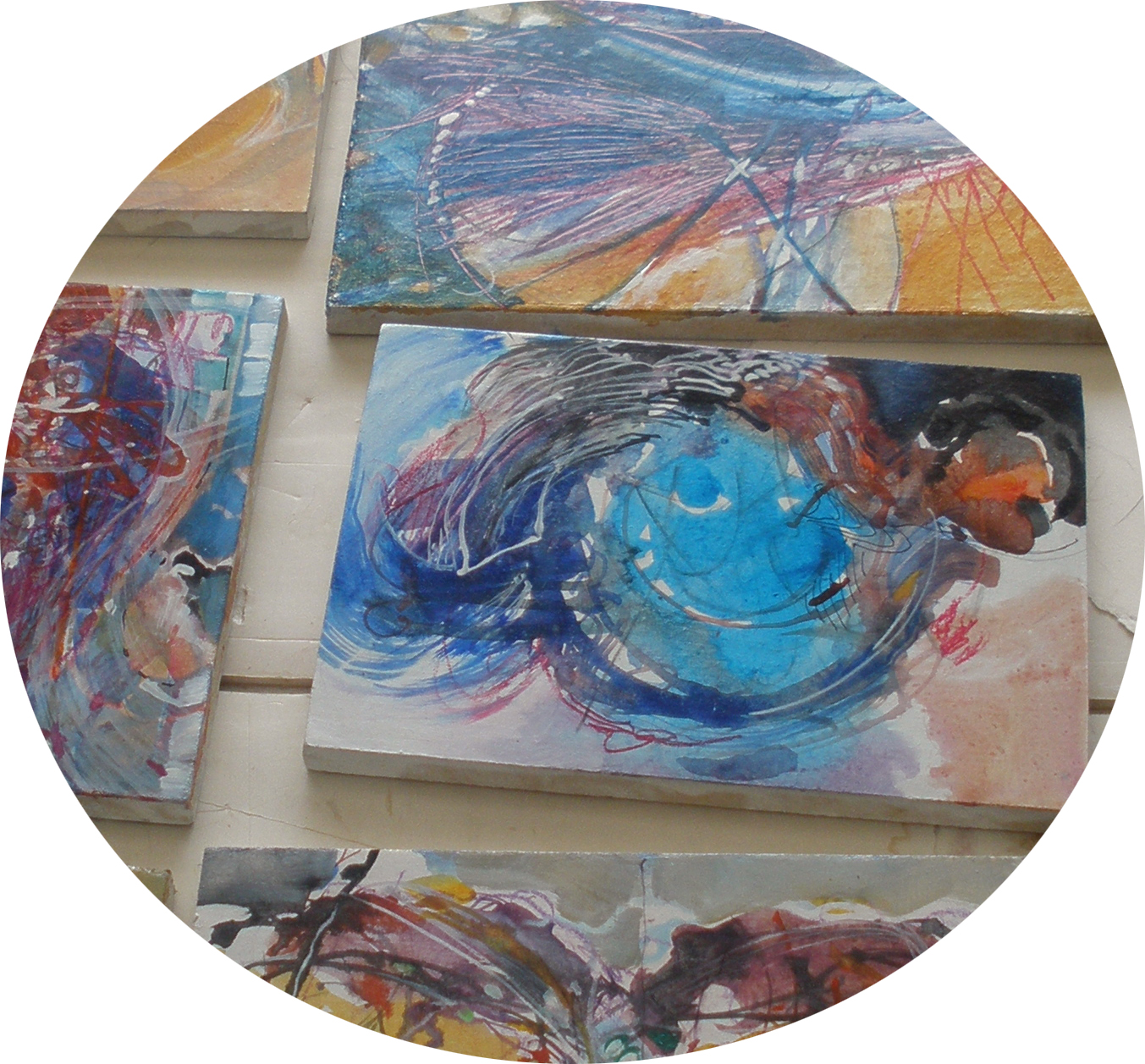 In the mid-twentieth century there was an active group of artists and illustrators including Craig Rubadoux, Ben Stahl and Syd Solomon among others, who lived and worked in Sarasota. They garnered both local and national attention and furthered Sarasota’s reputation as a thriving art community.

Craig Rubadoux still lives in this area and also has a seasonal studio in Nova Scotia. His home here is hidden away at the end of a dirt road. It’s nestled in the trees overlooking a bay. Inside, the walls are completely covered with art made by himself, his friends and other artists he admires. Fascinating books, adorable pets and music fill the house. His studio, surrounded by private land and fronted by the bay, is a huge screen porch that opens to the breeze on three sides.

In this setting, Pamela Beck talked with Craig Rubadoux about his early Sarasota days and what’s on his mind today.

PB: What was Sarasota like when you first moved here?

CR: I came to Sarasota in 1945 with my family, when I was seven or eight. Only 45,000 people lived here then. I joined the Sarasota Art association (now Art Center Sarasota) on Palm Avenue. They let me have a one-person show in their storefront when I was twelve.

At that time in Sarasota, there were Beaux Art balls and dances, but I didn’t go to things like that. When I was around thirteen, I took an art class that Syd Solomon taught at the Ringling Museum. I still remember how I spilled a bottle of india ink on the outside loggia floor at the museum during one of his classes. The stain stayed there for years until it came out. I liked watching it fade.

The Ringling School of Art, as Ringling College of Art and Design was formerly called, was only two or three buildings. There was a greater sense of camaraderie between everyone back then there is now. Activities and people from The Ringling School, The Ringling Museum and the Sarasota Art Association all were actively involved with each other.

I took a lot of high school art classes. My art teacher, Mrs. Clements, thought I was promising and took me to meet Ben Stahl at Hilton Leech’s studio. I was a senior in high school and Stahl asked me to be his apprentice. I thought I might be an illustrator like he was, so I could help support my family. But when I saw the hoops you had to jump through—well, let’s just say that I don’t like people telling me what to do or how to paint.

Then I got a scholarship to Ringling for one year through the Scholastic Art Award. I enjoyed the life classes the best. They had those figure drawing classes three times a week. There was a nice group of teachers at the school, but I couldn’t afford tuition to finish studying there.

When Stahl and his family were getting ready to travel abroad, I was asked to go along as his children’s tutor (although I didn’t do any tutoring…).  We drove through Holland, France and Spain, stopping at museums. We saw a lot of great paintings and it was the first time I saw the Louvre and the Prado. When I saw the Goya paintings at the Prado, they knocked my socks off.

We went to Torremolinos on Mackinlay Kantor’s (the writer) suggestion. Ben Stahl completed his “14 Stations of the Cross” paintings and then he and his family left. I stayed and rented a room. Everything was cheap there. I put out a sign that said ‘Art Gallery,’ on the building where I lived, and had an opening in an unused upstairs space there. The landlady was sympathetic.

I stayed there about eight more months, teaching watercolor and designs for pottery to make money. You didn’t need much money to live. I got another room in the building and had an opening there every Sunday because it was very touristy and new people came to see my work every week. Hotels were just starting to be built.

I painted the fishermen who slept on the beach and the people who traveled by donkey.  At night, I went to the local cafes and had a cognac and sketched the flamenco dancers.

PB: Looking around your house filled with art from many cultures, there’s hardly an empty spot on the walls. What influences are important to you?

CR: Besides much of the art I’ve seen in museums and friends’ work, I also like masks, outsider art and primitive art. I have a lot from Mexico, Africa, New Guinea and Costa Rica and some local Florida work too.  It resonates with me and so I’m overrun with stuff that you see all around my home. I find this kind of art inspirational.

PB: What do you think of the current climate for visual arts in our community?

CR: I don’t get out that much although recently I went to St. Pete. I saw “Post Coital,” a show at Mindy Solomon Gallery I liked, and also the Philip Pearlstein show at the Museum of Fine Arts. But I find that I just have enough time to do my stuff and do my thing. I don’t know what’s happening in places like New York either, and I’m not sure if it would help or hinder my work if I did. But I do get together with painter friends of mine occasionally.

CR:  I just suddenly felt drawn to explore abstraction again. I’d worked with abstraction in the 80’s. I might go back to figurative.  For now I like working on something I don’t have the answers to; I like the excitement that comes from not knowing how things will turn out.

PB: What’s your first memory of being a painter, even if you didn’t know you were one- as a child?

CG: I always drew, ever since I was a young child. My mother saved drawings of mine from when I was five yrs old. They were from my school class when we lived in Rochester, N.Y. before moving down here.  I remember one—it was of people on horseback seen from a window.

My mother and grandmother both drew and were very supportive of my interest in art. There were those “Learn How to Draw” Walter Foster books all around my house and when my family decided to move, they purposely picked Sarasota because it was known as an arts colony. They thought it would be good for me.

PB: Describe the feeling that makes you want to pick up a brush.

CR: It’s innate; I just have to do it, I have to make some marks in some manner. At this stage in my life, it’s a compulsion. I need to do it, but I like to know that at least one or two people respond to what I do.

PB: What are you thinking about as you paint?

CR: Depends on the mood I’m in or sometimes it’s something trying to get out, it has to get out. They’re not intellectual thoughts I’m having, but rather, how I’m feeling or what I’m experiencing in my life or with the animals or a walk along the beach or river. I think it’s like a diary.

Some of these thoughts could become something I will work on. Or not. It doesn’t matter; I just start sketching. I keep sketchbooks. For example, here’s a sketch I did that got me thinking about the painting next to it.

PB: Which artists locally and abroad, dead/alive resonate with you?

CR: Of people I personally knew, the painter Frank Rampolla was the biggest influence on me. People thought he was my teacher but we were really friends.  After I returned from Spain I took some life classes at Ringling School of Art, where I met Frank. He had a place in Sarasota where we could work. So we hired models and often drew and painted together. Then we would regularly discuss our work and for about ten years, even showed at the same gallery in Coral Gables, the Sindelir gallery. We helped put together a show in that gallery, “The 7 Deadly Sins.”

Eventually he went to USF/Tampa and taught printmaking there.  In fact, he got me a job at USF for a semester or two, but working in that setting wasn’t for me. Sadly, Frank had a heart problem and died at 40 in Tampa.

I like the work of my friends, the people I hang out with like Beatrice del Perrugia, Robert Baxter, Richard Mueller, Joyce Ely Walker, R.O. Woody—I really like so many artists; the list is endless. Of artists I’ve never met, here are some off the top of my head: Paul Klee, Willem de Kooning, Jean-Jacques Rousseau, Pieter Bruegel (“Hunters in the Snow” in particular), Edgar Degas, Toulouse Lautrec, Odilon Redon, Paul Cezanne, Henri Matisse, Pierre Bonnard, Hokusai, Balthus, Egon Schiele. I just thrill when I look at the work of these artists. Standing in front of a Botticelli, you almost want to cry.

PB: Your art clearly resonates with a Michigan collector, whom I’ve heard has purchased many pieces from you. Could you please talk about that?

CR: They’re a couple that has bought 160 works from me. They are in the process of publishing a book about me based on their personal collection, which should come out within the next year.

PB: You’re a shy person. How does this quality affect your work?

CR: It gives me more time to paint because I don’t go out to see many people. I have good friends but I enjoy spending a lot of time alone. I find that I can often express through painting what I find difficult to say.

PB: Please give an example of a work you find satisfying and discuss why.

CR:  “Finn.”  It sings. I can’t go beyond that. Every stroke seems to fit and help the other one along. Music and dance do that too, when they work. I listen to classical music when I’m painting.

This past year I’ve gone to and enjoyed Momix, the Itzhak Perlman concerts and the opera.

PB: Do you have a conflict between living in world of creative ideas/feelings and living in the practical world?   How do you straddle it?

CR: My kids say not very well. I’d like to approach life the way my high school art teacher told us to: never hurry, never worry, never procrastinate. That’s a good maxim, so I’m trying to live by it more and more. Thing is, I’m having trouble with the ‘never procrastinate’ part.

Pamela co-owned Pannonia Galleries in NYC. There she was also an art appraiser, private art dealer, art fair exhibitor and catalogued paintings at Sotheby’s. Perhaps it’s not surprising that she is also a psychotherapist. She has a keen interest in the arts and supporting Sarasota’s future as a lively, diverse and forward thinking city for young and old.Pamela is a member of The Fine Arts Society of Sarasota, Curatorial & Acquisitions Committee & Acquisitions Committee and Institute for the Ages Volunteer.