Katherine Pill is now the MFA’s first Assistant Curator of Art after 1950, the first curator dedicated to the museum’s growing contemporary collection and programming. 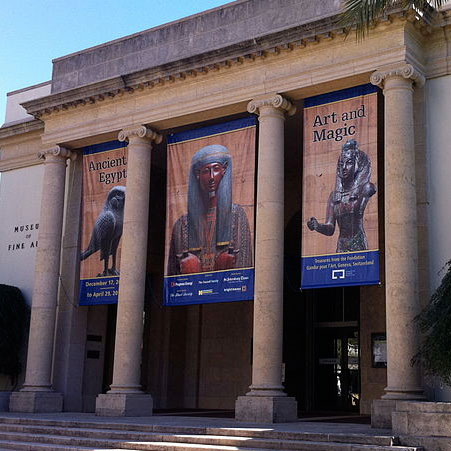 We often think of grants, donations, and endowments providing museums with new art or adding new wings and galleries.  The Hazel and William Hough Curatorial Endowment, though, has generously provided the Museum of Fine Art St. Petersburg with exactly what it needed: a new job position and the money to fill it.

Katherine Pill is now the MFA’s first Assistant Curator of Art after 1950, the first curator dedicated to the museum’s growing contemporary collection and programming.  It’s difficult to overstate the importance of Pill’s hiring – the move was timely and sorely needed by the museum and Pill appears to be an ideal fit.

The museum had rightly been known for its 19th century paintings and extensive photography collection with a blind spot, though, for contemporary art.  The slack would necessarily be picked up by nearby commercial galleries or by sending people to museums across the bay.  However, efforts over the past several years have given reason to be optimistic. Appointing Katherine Pill as a curator of contemporary art is the latest and perhaps most effective effort in uncovering this ‘blind spot’.

Pill’s academic and professional records are impressive and definitely make her appointment a logical one.  The degrees she holds – a double major BA and dual MA – as well as her most recent resume entry as assistant curator at Kansas City’s Kemper Museum of Contemporary Art seem to make her hiring a necessary development.  However, the first piece she has proposed to add to the museum’s collection may offer the clearest insight into her upcoming curatorship.

I try to avoid using such a narrow basis for my optimism but…I can’t help it, I’m excited.  It was only in 2007 that the museum acquired its first work of video art (also thanks to the Houghs) – arguably, a medium that matured before I was even born.  Thus, I never really entertained hopes of the museum adding a digital or net art work to the collection soon.  However, at the April 19th Collector’s Choice event, Pill made her first proposal for an addition to the museum’s collection: a custom piece of software.  Again, the Houghs – like the Charlie to the MFA’s Angels – arranged for the piece’s purchase.

The work Pill proposed is Michael Bell-Smith’s Waves Clock.  The piece is a projection of crashing waves as juxtaposed against a floating clock, ‘natural’ time contrasted with a human quantification of time.  Each portrayal of time nearly makes the other seem absurd.  Further, the piece is software rather than video, allowing the drifting clock to display real time and the work to (hypothetically) play out indefinitely.

This first proposal was not a conservative one.  The piece is new (created last year), the medium is new (to the museum), and the artist is relatively young (born 1978).  However, that isn’t to say the decision was reckless.  As progressive as the piece is, it is rather accessible – a younger web 2.0 audience will readily recognize the language.  Also, acquiring and exhibiting a pieces such as Waves Clock is possibly the most efficient step toward getting caught up with the national discourse, understanding where art is right now.

Perhaps, this may turn out to affirm Pill to be as bold a curator as I had hoped, and the Houghs to be an excellent match.  So as to not exaggerate the importance of a single purchase, though, I’ll limit myself to only adding this: I hope it is the beginning of a pattern.  It may be that seeing a good contemporary exhibit will require a causeway crossing less often.