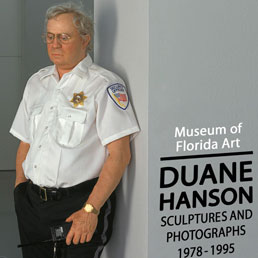 “People, workers, the elderly, all these people I see with sympathy and affection. These are the people who have fought the battle of life and who now and then show the hard work and the frustration …It’s all about human activity, it’s truth, and we all get there.” – Duane Hanson

The haunting lifelike sculptures of Duane Hanson (American, born in Minnesota 1925-1996) still shock and surprise us today. The best known and arguably the greatest realist sculptor of the twentieth century, Hanson for more than thirty years created works unparalleled in their power to hold our attention, fool our eyes, confound our sense of perception, and shake our sensibilities.

This exhibition, opening on December 7, 2012, and continuing through April 7, 2013, was organized with the assistance of the artist’s wife, Wesla Hanson. The show is is comprised of ten of his extraordinary sculptures, ranging from works in the 1970’s of his children – “Child with Puzzle” and “Children Playing” – to classic 1980’s sculptures of working class figures, such as “Security Guard”,” ” “Housepainter I’, as well as the last sculpture Hanson completed in 1995, “Man on Mower.”

Hanson’s sculptures are rendered in fiberglass, polyvinyl, auto body filler and bronze. But whatever the medium, in their combination of the physical and psychological, Hanson’s work continues to elicit an emotional response from the viewer. But focusing his empathy for ordinary man with his concern for societal’s social and political ills, Hanson created an enduring narrative on the American condition. Through the realism of his figures, at once shocking, poignant and seductive, he sought to reveal truths about life. By choosing ordinary individuals leading unremarkable lives, Hanson took sculpture off its pedestal and removed the boundaries that separated art from life.

Although Hanson began making hyperrealistic sculptures in 1967, it wasn’t until 1977 that he started to take instant photographs as a sketching tool for his sculptures. The photographs are a window into the mind of the sculptor’s obsessive journey into hyperrealism. Close to one thousand photographs were found in his studio – a virtual “sketchbook” used by Hanson for selecting posture, placement and props for his models and works in progress. The Museum’s exhibition is accompanied by 75 “unknown” Kodak and Polaroid instant prints intended as visual assists during the making of his sculpture. As a multi-snapshot series, the photographs add an eerie dimension to Hanson’s now-famous sculpture, while bringing into question the relationship between photography, sculpture, art and life.