Internationally renowned sculptor Patrick Dougherty weaves large-scale architectural forms from trees, twigs, vines, and other natural materials. In January 2013, the artist will spend three weeks in Sarasota creating one of his unique sculptures on the grounds of the historic Sarasota High School and future home of the Sarasota Museum of Art/SMOA 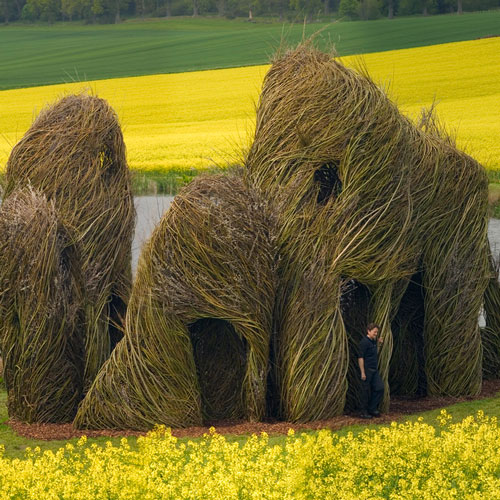 Wendy G. Surkis, president of Sarasota Museum of Art/SMOA, a division of Ringling College of Art and Design, announced that renowned sculptor Patrick Dougherty will be here for SMOA’s 2013 “ARTmuse” program, January 7-26, 2013. His imaginative monumental sculptures made of trees, twigs, vines, and other natural materials can be seen around the world. During his three-week Sarasota project, the artist will build a site-specific installation on the grounds of the historic Sarasota High School, which will become the future home of the Sarasota Museum of Art/ SMOA. Surkis says the public will have many opportunities to view the artist at work—and watch his creation unfold and evolve. She encourages people to stop by the high school to see the work in progress.

“This is a remarkable opportunity for our community,” says Surkis. “Patrick has exhibited his work around the world; we’re thrilled that he is coming here for SMOA. It’s an example of the fresh ideas SMOA will be bringing to Sarasota.” Surkis adds that it’s “pure joy to watch his creations come alive as he bends, twists and cajoles tree branches into large, dreamlike architectural forms that invite people to explore, wonder and wander through his amazing environments.”

Born in Oklahoma in 1945, Patrick Dougherty was raised in North Carolina and studied art history and sculpture at the University of North Carolina. Combining his carpentry skills with his love of nature, Dougherty began to learn more about primitive techniques of building and to experiment with tree saplings as construction material. In 1982, his first work, “Maple Body Wrap,” was included in the North Carolina Biennial Artists’ Exhibition, sponsored by the North Carolina Museum of Art. His work quickly evolved from single pieces on conventional pedestals to monumental scale environmental works, which required saplings by the truckloads. Over the last 30 years, he has built over 230 of these works, and become internationally acclaimed. Dougherty has received numerous awards, including the 2011 Factor Prize for Southern Art, North Carolina Artist Fellowship Award, Pollock-Krasner Foundation grant, Henry Moore Foundation Fellowship, Japan-US Creative Arts Fellowship, and National Endowment for the Arts Fellowship. Princeton Architectural Press published a major book, “Stickwork,” about the artist and his work in 2009. For more information about Patrick Dougherty, visit www.stickwork.net.

SMOA’s ARTmuse programs bring renowned artists and museum professionals to our region. According to Surkis, “They share their creative journey and impart a deep understanding of who they are, what they do and how they do it.” Surkis adds that these distinguished visitors give the public, “unique and meaningful learning experiences in an up-close-and-personal setting. Our enlightening programs provide Sarasota art enthusiasts a sense of what’s to come once SMOA is up and running.” Previous visiting artists have included Lesley Dill, Janet Echelman, Judy Pfaff and Seth Randal. This year’s Patrick Dougherty corporate sponsor is PNC Wealth Management.

Dougherty will participate in SMOA’s 2013 “ARTmuse” program, January 7-26, 2013. A celebratory first event, the “SMOA Inaugural Bash,” is Sunday, January 20, 2013, 6 p.m.-10 p.m., on the grounds of the historic Sarasota High School. The public is invited to meet the artist, enjoy libations and cuisine from The Sarasota-Manatee Originals, and enjoy the stirring sounds of Tampa’s premier dance band, Ace Factor. Tickets start at $125. For tickets and more information about this event, call 941-309-0118 and specify SMOA Inaugural Bash. For information about sponsorship and benefactor opportunities, contact Mary Lee Richey at 941-309-4732.

For more information about Sarasota Museum of Art/SMOA visit www.sarasotamuseumofart.org or call Wendy G. Surkis at 941-309-7662.