With its emphasis on the technological aspects of new media, this exhibit examines the possibilities that technologies offer as tools for the poetic transformation of reality and the approach to forms of expression in art and daily life. 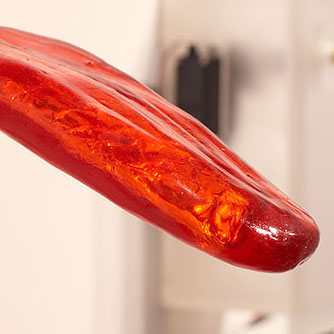 Open Score pays homage to artist Robert Rauschenberg’s groundbreaking performance art presentation titled 9 Evenings: Theatre and Engineering, held in 1966 at the Armory in New York City. In that performance (organized by Rauschenberg and Billy Klüver, a research scientist at Bell Labs in Murry Hill, NJ), 10 artists worked with 30 engineers and scientists from the Bell Laboratories to create a series of groundbreaking performances that incorporated new technology. They used video projection, wireless sound transmission, and Doppler sonar technologies considered ordinary today but that had never been seen in the art of the 1960s. These events united artists and scientists in the use of new technology and invited new artistic forms. Open Score, with its emphasis on the technological aspects of new media, examines the possibilities that these technologies offer as tools for the poetic transformation of reality and the approach to forms of expression in art and daily life. The exhibition, with its compelling interactive works suitable for a wide range of ages and demographics, promotes the development of visual literacy in our image and technology-dense culture; deals with issues of collective authorship and civic participation; and encourages a questioning of those power, control and social levels that technology produces despite its attempts at democratization.

Selected works from the exhibition include Alt Control, a participatory work by a collective composed of Clark, Gómez and Moon, that considers the ways in which information about art is made available on the web. They have created an interactive program that invites viewers to recreate the work of famous artists while controlling, restricting and surveilling their participation. Other works include those by Bill Vorn, a pioneer in the Aesthetics of Artificial Behaviors, who will present Hysterical Machines, robotic devices with pyroelectric sensors that allow them to detect and react to the presence of viewers in the gallery. Patricia Clark’s Malecón is a seven-channel video that documents the changes to Havana’s famed seawall over the course of 14 years. Ingrid Bachmann’s Pinocchio’s Dilemma features a row of candy-colored tongues that wag at the viewer’s approach, while a nose-like protuberance grows from an opposing wall, with his or her every movement. Camilo Martínez and Gabriel Zea’s Dispenser of Values is a typewriter attached to a computer, that viewers must hand crank in order to generate a print (which they can keep), whose value is associated with the amount of labor needed to produce it.

RELATED EVENTS ­ All events are free and open to the public

OPENING NIGHT – January 18
A Conversation with Open Score Curators and Artists, 6pm
Barness Recital Hall / MUS107, USF School of Music
Join curators and artists from Open Score for a conversation about the exhibition and their work.