Documenting 80 years of Sarasota history including 33 photographs captured from 1886 to 1966. The photos include the Great Fire of 1908, Sarasota’s first jail, construction of the Sea Board Air Lines Railway and many other significant local events. 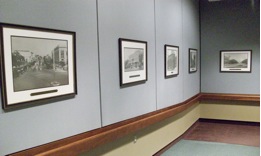 A permanent exhibit of historic Sarasota photographs, known as ‘A Walk Through Time’, will officially open in the Commission Chambers in City Hall, 1565 First Street, with a reception Tuesday, November 13 from 5:30 to 7:30 p.m. Refreshments will be served.

Documenting 80 years of Sarasota history, ‘A Walk Through Time’ includes 33 photographs captured from 1886 to 1966. The photos include the Great Fire of 1908, Sarasota’s first jail, construction of the Sea Board Air Lines Railway and many other significant local events. “The exhibit was developed as part of the City’s historic preservation program and represents an effort by the City of Sarasota to increase community awareness of its past,” said Dr. Clifford Smith, Senior Planner and staff liaison to the Historic Preservation Board. “The purpose also is to provide the public with an education on the City’s heritage, culture, and the historic architectural resources they see virtually every day here.”

The signature piece in the collection features the original Town of Sarasota Plan from 1886, a letter from 1913 penned by the City Engineer attesting to the authenticity of the Town Plan, and a panoramic photo of downtown Sarasota taken on September 15, 1926. The idea for the exhibit came about when City staff discovered old film negatives while moving offices. Unfortunately, those negatives were damaged and unsuitable for exhibition. But, enthusiasm for a permanent historic photo exhibit remained strong and offered the opportunity for a community partnership. Local historian Jeff LaHurd offered photos from his personal collection to be used in the exhibit as well as photos from the Sarasota County History Center Pete Esthus Collection and Josie Gaines Collection.

The Historic Preservation Board recommended authorizing $10,000 in historic preservation funds for the project, which the City Commission approved. The Downtown Improvement District also provided $1,000.