Recently I attended “In a Conversation with the Collector” at the Historic Asolo Theater. There were two chairs on the stage for Warren Coville and Matthew McLendon, Ringling’s Curator of Modern and Contemporary Art. 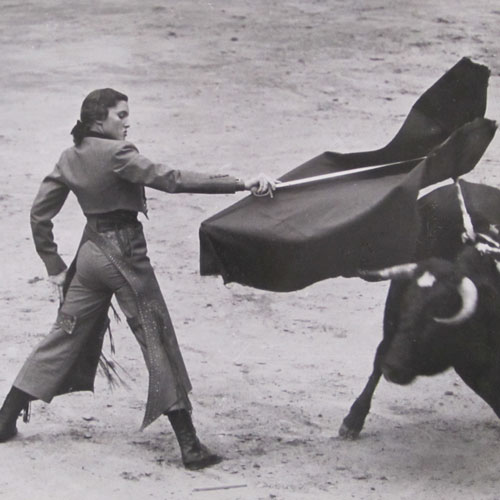 It’s a good thing for visitors to the John and Mable Ringling Museum of Art that Warren J. Coville decided to use part of his bar mitzvah money to buy his first camera many years ago. This began a lifelong passion with cameras and photography that would result in an important collection of late 19th to 21st century photographs, more than 1,000 of which have been donated to the Ringling museum by Warren and Margot Coville.

Recently I attended “In a Conversation with the Collector” at the Historic Asolo Theater. There were two chairs on the stage for Warren Coville and Matthew McLendon, Ringling’s Curator of Modern and Contemporary Art. But before they sat down, Mr. Coville came to the front of the stage, turned towards the audience with his camera, and took several shots of us looking at him.

We laughed. He smiled. We connected. This was a perfect introduction to Coville as a photographer and collector, a man who likes to frame life’s moments so they can be caught, observed and enjoyed in perpetuity, rather than disappear into unreliable memory. In fact, the reason he said digital photography didn’t interest him was because of its instability- it doesn’t last like a gelatin silver print does.

I’m glad that images including: Hitler and Mussolini Meeting in Venice; the Eiffel Tower mid-construction; Lee Harvey Oswald being shot; Conchita Citron, the woman bullfighter; hospital workers in the South Bronx and portraits of Martin Luther King and Winston Churchill, along with other photographs, were preserved and are now a permanent part of the Ringling Museum for us to view. It’s both moving and disarming to see such a large collection of extraordinary images that reflect our collective experience of life’s large and small moments.

The Covilles not only enjoyed looking at the photographs in their collection, they enjoyed buying them as well. For over twenty years, they traveled from Michigan to attend the biannual Photograph auctions at Christie’s and Sotheby’s in New York. Mr. Coville recalled the buzz that only an auction room can create as buyers bid against each other for the same lot while the public watches.

The bidding process can become entertainment itself. Mr. Coville described purchasing a Clarence H. White portfolio of photographs at Christies in the 1980’s, for what was then a record price- $21,000. He recalled with a smile that when the auctioneer’s gavel came down and he was the winner, the entire audience broke into applause.

It’s interesting to develop a photograph collection- for the pleasure of looking at the images; to enjoy the hunt for special ones; to round out the collection to best reflect the goals of the collectors; to leave it for others to share; but Dr. McLendon wanted to know what the Coville’s motivation was for continuing to collect over the years.

Mr. Coville explained that photojournalism, in particular, spoke to him because of his interest in history. Looking at the images was a “learning experience” he said, and that just like any other collector of cars, art or glass, collecting them became a passion. The Covilles also looked forward to the excitement auctions brought and the travel involved to acquire the photographs of interest to them.

Today the Covilles live part time in Sarasota. After listening to him talk with such devotion about his collection, I’m sure we’ll run in to them at the Ringling Museum, when we go to visit the stunning selection of photographs they so generously donated.

The current exhibition of approximately 75 photographs at the Ringling Museum, “The Warren J. and Margot Coville Photography Collection,” is part of the museum’s Art of Our Time initiative, “which features work by artists that are shaping the trends in contemporary visual and performance art” according to the museum. This exhibition runs through February 3, 2013 in the Ulla R. and Arthur F. Searing Wing.

One thought on ““The Warren J. and Margot Coville Photography Collection at the John and Mable Ringling Museum” by Pamela Beck”