I stopped by to look at the Interactive 3D pavement art. Over a dozen well known international artists were creating their circus inspired compositions right before the eyes of an awed crowd. 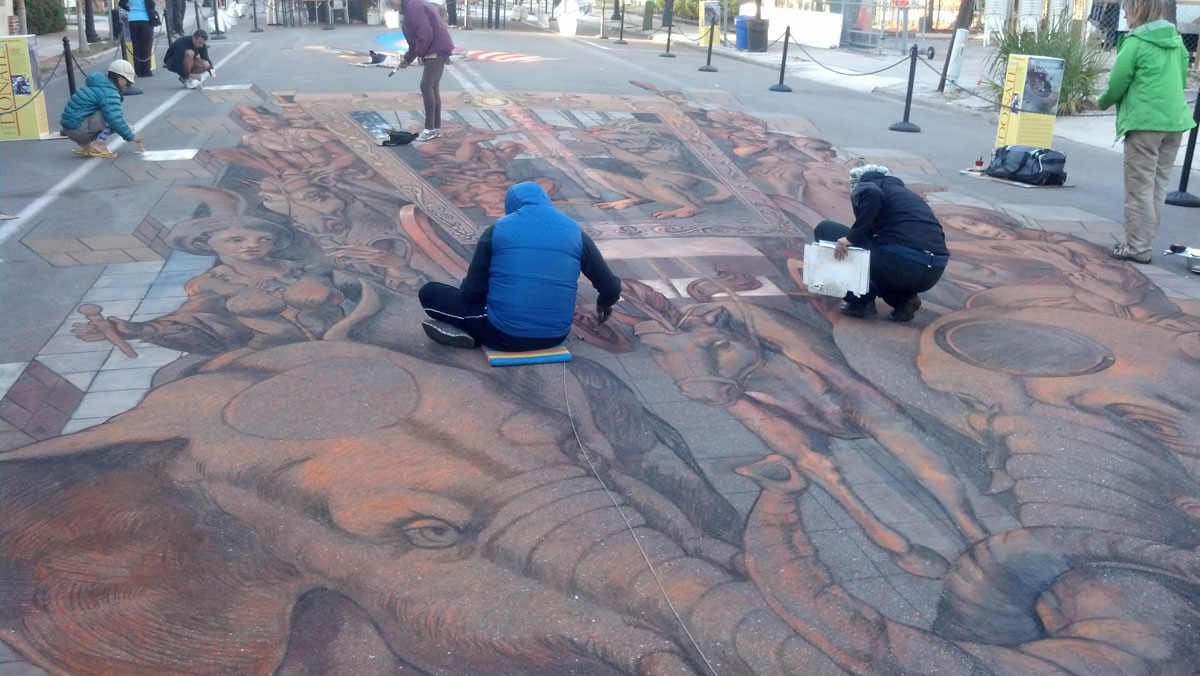 For many of us, childhood memories of drawing with chalk on the sidewalk are not very interesting and often the source of conflict. We used chalk to make arbitrary but enforceable boundaries (Your ball went over the line, so now you’re out!); to play tic tac toe (No, you can’t go first until you finally win one, you crybaby.); and to draw pictures on someone’s driveway until the unimpressed owner invariably came out and yelled “Hey you, Picasso. Go find somewhere else to paint your masterpiece.”

If only there had been something like the Sarasota Chalk Festival in our town. Then we might have earned some respect as we honed our artistic skills for possible future festival participation! (Maybe even hothead neighbor would have piped down.)

And respect and admiration is just what’s in the air when you walk around “Circus City, USA,” this year’s Chalk Festival, a bow to Sarasota’s circus history. For ten days, this free festival spans 300-600 South Pineapple Avenue in Burns Square and currently runs through November 6th.

I stopped by to look at the Interactive 3D pavement art. Over a dozen well-known international artists were creating their circus inspired compositions right before the eyes of an awed crowd. Standing aloft on a two-story scaffold nearby these artists, was Kurt Wenner himself, the celebrated innovator of this art form. He was directing his own crew of artists from Japan, Germany, Italy and Mexico as they created a complicated, original and beautiful work of visual illusion, premiering a new Wenner technique designed for the festival. This elaborate, massive, intricate piece is a must see for both its extraordinary imagery and eye teasing technique.

Between November 1-6, visitors will be able to step into these artworks and among many options, they can strike a pose with lions, kiss an elephant or perch on a clown’s palm. In this unlikely street setting, experiencing art so directly, surrounded by giggles and cries of disbelief, I can’t imagine that even a killjoy could resist attempting an imaginary balancing act along the high wire painted on the street.

The 2D pavement artists will chalk between November 2nd-4th. Their finished artwork can be viewed November 5th and 6th. And don’t forget to look up as well– painters, spray can and airbrush artists are going vertical, creating artworks on pre-approved private walls around the city. Over five hundred artists are participating in all of these events.

At different times throughout the festival, there are performances of music, dance, acrobats, and street performers, along with special events. The information for all of these can be found on the festival website under “Events.”

To expand on what you learn from your direct chats with the artists on the streets, Clothesline Gallery and Boutique, at 529 South Pineapple, is presenting “Creative Conversations Chalk Festival Series.” In a six-session format, festival artists discuss their work and inspiration with a moderator and the audience. So far, there’s been one interview with Leon Keer from Holland. I like how he described his work: “I never explain my paintings but can say that I am interested in everyday things. I look through old magazines for ideas. I try to paint people’s forgotten stories and encourage others to remember their own stories and retain their memories.”

“Forgotten stories”- one small, beautiful fragment of information like that, helps me see different things in Keer’s work. Henry Darnell is the next artist in this series. He’s up today, November 1st at 7PM.

This festival starts off with a strong sense of anticipation built-in to it. Watching the art being made, you think that its completion will be the cherry on the cake. But along the way, the personal interaction among the audience, artists and the art itself combined with the closing down of the streets for the art, festival guests and visitors, makes the entire Chalk Festival experience an immensely satisfying end unto itself. (Probably like years ago, when the circus village rolled into town.)

At one point, a Swedish family with two girls about ten and twelve years old, stood next to me on the street. We watched the artists chalk on the pavement below us. Soon the mother and I began to talk.

“We wanted to take a vacation with our girls. We knew about Sarasota’s beaches and cultural activities, but when we heard about the Chalk Festival, we thought the girls would love it; so we booked our trip for this week.”

“How have they liked it?” I asked.

“They love the paintings and can’t believe they’re done so well and in chalk. But what my husband and I didn’t expect is the spirit on these streets. Even though everyone is working on their own thing, and many from different countries, it feels like everyone’s connected. It’s very moving.”

For events, hours, address, directions, info and all schedules:
www.chalkfestival.org