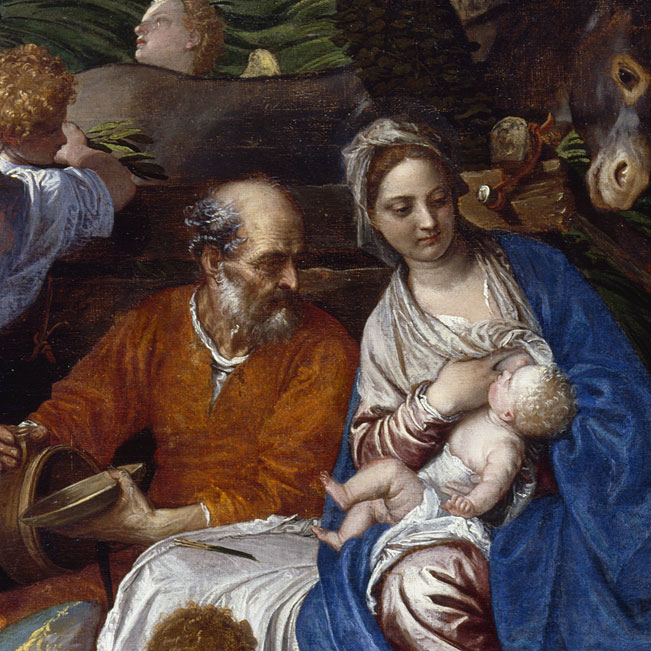 This December, the John and Mable Ringling Museum of Art will present a major exhibition of the work of Paolo Veronese (1528–1588), a master of Venetian Renaissance painting. The first comprehensive exhibition of Veronese’s work in North America in over two decades, Paolo Veronese: A Master and His Workshop in Renaissance Venice brings together more than 50 of the artist’s finest paintings and drawings from North American museums and private collections. Presenting imposing altarpieces and smaller religious paintings for private devotion or collectors, striking portraits, depictions of sensual narratives drawn from the classical tradition, and majestic allegories glorifying the Venetian state, the exhibition will introduce the range of Veronese’s art, in which the opulence and splendor of Renaissance Venice comes to life. Veronese was also a highly accomplished draughtsman, and this exhibition will provide audiences a rare glimpse into his work on paper, from gestural sketches to highly-finished chiaroscuro sheets. The Ringling will be the sole venue for Paolo Veronese, which will be on view from December 7, 2012 through April 14, 2013 in the Museum’s Ulla R. and Arthur F. Searing Wing.

One of the exhibition’s highlights will be the Ringling’s own work, Rest on the Flight into Egypt (ca. 1572), one of only two complete Veronese altarpieces in North America and the first Old Master painting acquired in 1925 by the Museum’s founder, John Ringling. The exhibition will also feature two other works from the Ringling’s collection: Portrait of Francesco Franceschini (1551), the artist’s first known surviving, full-standing portrait, painted when Veronese was just 23 years old, and a painting John Ringling bought as a Veronese, A Family Group (ca. 1565), now understood to be the work of his talented pupil Giovanni Antonio Fasolo.

“One of the most impressive paintings by Veronese in America is the Ringling’s Rest on the Flight into Egypt, which happens to be the first Old Master painting acquired by John Ringling for this museum,” said Steven High, executive director of The John and Mable Ringling Museum of Art. “In recent years, the Ringling Museum has made a concerted effort to organize important exhibitions based on prominent works in our European collection, and Paolo Veronese is the latest in this series. This exhibition hopes to introduce new audiences to the broad spectrum of Veronese as a painter and draughtsman, while making a major contribution to the study of the artist.”

Conceived and organized by Dr. Virginia Brilliant, the Ringling Museum’s Curator of European Art, in cooperation with Frederick Ilchman, Curator of Paintings at the Museum of Fine Arts, Boston, the exhibition highlights Veronese’s artistic process and his rich and varied artistic production. Veronese often depicted the same subjects time and again throughout his career, and the exhibition will examine the artist’s evolving perspectives on the Rest on the Flight into Egypt, the Baptism of Christ, and the Death of Christ through the side-by-side comparison of works in a variety of formats, sizes, and media. For example, the Ringling’s Rest on the Flight into Egypt will be placed in conversation with the National Gallery of Canada’s painting and the Harvard Art Museums’ highly finished drawing of the same subject, as well as the Cleveland Museum of Art’s preliminary sheet of sketches in which the artist’s ideas for all of the finished works originated.

“Veronese is broadly represented in American collections, in contrast with contemporary Venetian painters like Tintoretto and Titian, and thus the exhibition ably surveys his career and oeuvre,” said Virginia Brilliant, the exhibition’s lead curator. “Yet Veronese is often dismissed as a merely decorative painter, more elegant and ‘happier’ than Titian or Tintoretto. This exhibition hopes to shift this perception, and to shed light on Veronese as a masterful, deeply empathetic storyteller and narrative painter whose works were often invested with rich layers of meaning.”

Paolo Veronese will feature prominent works drawn from private collections as well as museums such as the National Gallery of Art in Washington, D.C., the Museum of Fine Arts, Boston, the Harvard Art Museums, the Cleveland Museum of Art, the National Gallery of Canada, and the J. Paul Getty Museum, among others. As Veronese was known for his rich representations of Renaissance Venice’s luxurious fashions and fabrics, the exhibition will include rare 16th-century textiles from the Museum of Fine Arts, Boston, such as a red damask made of silk and gilt metal thread brocade and a reticella lace towel, which will be displayed alongside paintings portraying similar fabrics.

This exhibition will also mark the first reunion in the U.S. of four works that were once part of the same decorative ensemble — Allegory of Painting (1560s) from the Detroit Institute of Arts, and three panels from the Museum of Fine Arts, Boston: Jupiter and a Nude (1560s), Actaeon and Diana with Nymphs (1560s), and Atalanta and Meleager (1560s)—oil on canvas paintings that are believed to have been installed together as a frieze along the walls of a palace or country villa. Curators will also be testing a new hypothesis that two paintings depicting scenes drawn from Ovid’s Metamorphoses, Diana and Actaeon (ca. 1560–65) from the Philadelphia Museum of Art and Apollo and Daphne (ca. 1560–65) from the San Diego Museum of Art, may have been from the same decorative ensemble. The paintings, which share a similar provenance, dimensions, and scale of figures, will be displayed side-by-side so viewers can compare their use of light, landscape, and color. The exhibition will also feature Thomas Struth’s Galleria dell’Accademia 1, Venice 1992 (1992) from the Museum of Fine Arts, Boston, inviting visitors to reflect on Veronese’s impact on contemporary audiences.

An illustrated catalogue published by Scala Publishers Ltd., accompanies the show, featuring scholarly yet accessible perspectives on the artist from more than ten contributors, including Dr. Virginia Brilliant, Curator of European Art at the Ringling, Frederick Ilchman, Curator of Paintings at the Museum of Fine Arts, Boston, and David Rosand, Meyer Shapiro Professor of Art History Emeritus at Columbia University, among others. The catalogue will be available in the Ringling Museum’s store and from retailers online. Several programs are planned in conjunction with the exhibition, including a lecture by Venetian Renaissance scholar Peter Humfrey, Professor of Art History at the University of Saint Andrews, Scotland on Saturday, December 8, 2012 at 10:30 a.m. A scholarly symposium devoted to the artist is also planned for March 8-9, 2013.

Recent exhibitions of European art at the Ringling have included: The Triumph of Marriage: Painted Cassoni of the Renaissance (2008); Venice in the Age of Canaletto (2009 –10), Gothic Art in the Gilded Age: Medieval and Renaissance Treasures in the Gavet-Vanderbilt-Ringling Collection (2009–10), and Peter Paul Rubens: Impressions of a Master (2012).