Bart Johnson wants to give people something they can’t see in the real world. His small-scale compositions consist of fluid, undulating, and seemingly infinite arrangements of imagined figures. 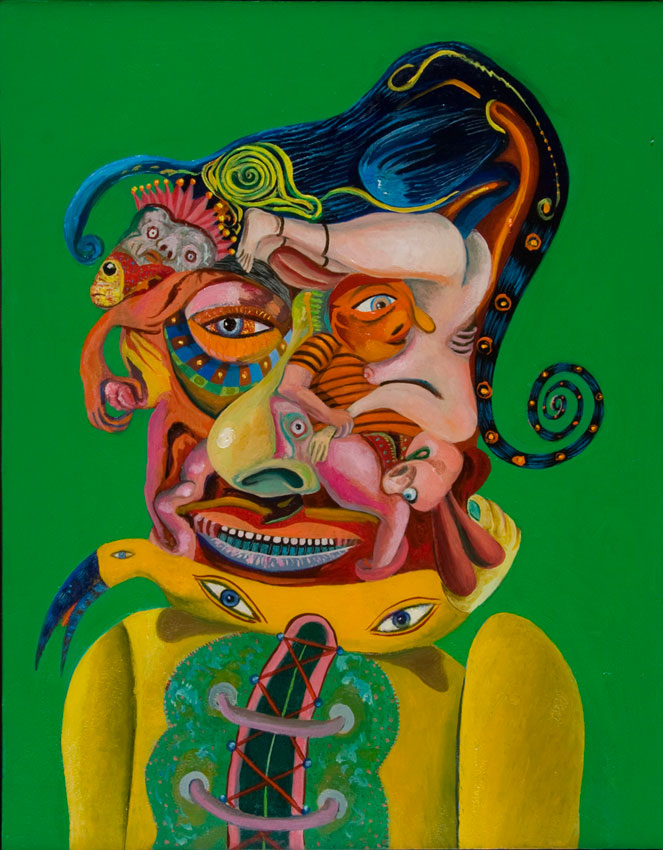 Bart Johnson wants to give people something they can’t see in the real world. His small-scale compositions consist of fluid, undulating, and seemingly infinite arrangements of imagined figures. Upon each new look, the viewer is bound to discover additional bodies, forms, and features at first unseen. As he creates each piece, Johnson produces increasingly numerous layers of hidden limbs and faces—a labyrinth of life and imagination, his own “night world” that viewers can enter.

Born in Washington, DC in 1954, Johnson spent his teen years among the collections of DC’s major museums. He felt a connection to early American painters and European masterworks and their explorations of the human figure, the figure being the basis of his own work as well. Despite attending art school in the 1970s, Johnson does not consider himself to be a contemporary abstract artist. “I found 70s pop, photorealism, minimalist movements, and conceptual art to be cold and detached, lacking the deep feeling of painting of the past,” he notes.

As to color palette, his research and use of historical pigments also corresponds with the Old Masters, including Bosch and Ensor. The excitement of painting, for this artist, is the rich involvement and depth possible on a small scale through the presence and texture of his medium.

Johnson also notes the impact of his “Dionysian” coming-of-age experience, now a memory which also feeds his artwork. Johnson was in grade school in Washington, DC, during the Kennedy assassination, Martin Luther King’s murder, and the race riots, and grew up during American music’s movement away from the light mood of the Beatles toward darker times with Jimi Hendrix and Janis Joplin. And, “I was in Richmond during the Vietnam war, surrounded by anarchy, radical politics, and hallucinogenic drug use. I think a lot of what I’m doing now, my sensitivity to current calamity, is affected by that formative period.” Today, Johnson sees a connection between contemporary trends in technology, isolation, and toxins and a widespread fascination with zombies and vampires—American society becoming “the living dead.”

Johnson’s grotesque, macabre figures dwell between the spiritual and natural world. ‘Inside the Labyrinth’ will feature these complex forms affixed to a variety of surfaces and media. Oil paintings, graphite drawings, etchings and pen and ink work will be the two dimensional offerings. Johnson’s lively cast porcelain works will also be available.

About the artist:
Bart Johnson studied painting at Virginia Commonwealth University, where he received a BFA. He earned an MFA from The School of the Art Institute of Chicago, then lived in New York City for the next 18 years. Johnson’s art is derived from life experiences in various working class jobs as a housepainter, dishwasher, security guard, warehouse worker, janitor, typesetter, telemarketer, and social worker. For the past ten years, he has lived “at the end of the earth” near Albuquerque, New Mexico. Johnson’s work is in private collections in the US and Europe, as well as the de Young Museum in San Francisco.