This is not a plug for Norman Rockwell, William-Adolphe Bouguereau (or the Scientologists). Like them or not, it’s your choice. But for many people, art appreciation is caught between what people think they should like and what they actually do like. And the two often don’t agree. 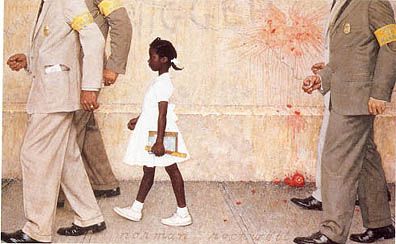 I know you’re out there: Otherwise edgy people who pretend they don’t like Norman Rockwell.

As secrets go, this one’s not in the category of hiding the lovechild you had with your maid ten years ago (hats off, Arnold); and in recent years, more people have begun to view Rockwell as more than a guilty pleasure. But for those whose tastes in art fall unerringly on the side of challenging, intellectually charged work, whose art education and exposure has been vast and varied, admitting that you like Rockwell or art labeled as sentimental can be met with looks of pity, scorn and derision.

Recently I discussed this with a friend who, while she keeps up with all art things current, happens to be a closet Rockwell fan. (I outed her by accident last year when I found a Rockwell postcard on her desk and she had to come clean.) In fairness, she didn’t actually fake distaste for Rockwell, she just never said how much she liked his work in the many conversations we’ve had about art.

We considered what else she felt she had to hide. Does the need to appear what many consider “sophisticated,” extend beyond her aesthetic tastes? Must she hide her undying curiosity about why Katie Holmes left Tom Cruise (and what is it about those Scientologists?) along with her interest in the highly collected French Academic painter, William-Adolphe Bouguereau, often reviled for his paintings of cherubs and pretty girls?

But when my friend stopped to think about how often she avoided these topics in conversation, she had to admit that yes, in fact, she did skirt around them in public. “Especially with strangers who would probably think I was a lightweight if they didn’t know me better.”

First impressions are important, there’s no denying that. But if you were seeking to impress someone, wouldn’t you have to know that person very well to understand what would, in fact, impress him/her? These things aren’t black and white, unless you yourself are.

Imagine a scenario where you’ve just met a highly regarded, erudite old master painting scholar you’ve always admired. In the course of your conversation, he tells you he’s enchanted by Rockwell’s iconic American imagery and impressed by his dexterous painting technique.

If you were a secret Rockwell fan, would you feel a surge of relief? (The expert likes him too!) Would you wish you had said that you liked Rockwell first? (He would have known how multi-faceted I am!) Would you admire the scholar’s individuality? (Why can’t I be as comfortable with my questionable opinions?) Interesting to consider our own reactions at such moments and what they reveal about us.

This is not a plug for Norman Rockwell, William-Adolphe Bouguereau (or the Scientologists). Like them or not, it’s your choice. But for many people, art appreciation is caught between what people think they should like and what they actually do like. And the two often don’t agree.

In the unlikely event that curating an exhibition is next on your list, this issue is something you might want to jump on ASAP. As for everybody else, this isn’t a timed race and there’s no door prize waiting for you once you’ve left the gallery, museum or your friend’s art collection. Looking at art often and learning about it, usually helps people feel more comfortable with their own reactions, whatever they may be.

Who knows, maybe the next time you meet that old master paintings scholar, you’ll admit that Rockwell’s work reminds you of a lost innocence you find quite moving, even if you roll your eyes while looking at it. Two contrasting points of view can be true. At least they’ll be your own.