Presenting the work of the cartoonist and pioneer animator Windsor McCay, the creator of the proto-surreal series of comics Little Nemo in Slumberland. Original drawings and tear sheets on loan from the Ohio State University Billy Ireland Library & Museum are featured along with videos. 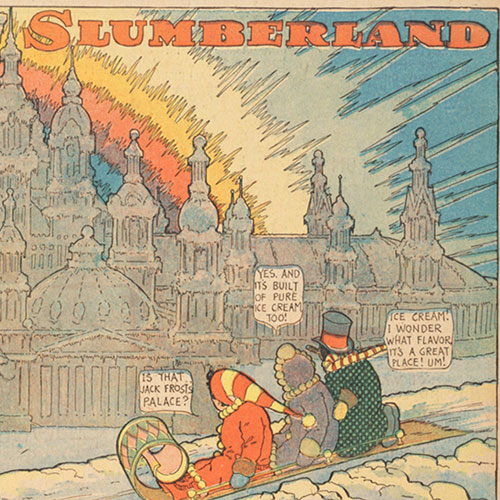 Selby Gallery, in collaboration with Sarasota Opera, presents the work of the cartoonist and pioneer animator Windsor McCay, the creator of the proto-surreal series of comics Little Nemo in Slumberland. Original drawings and tear sheets on loan from the Ohio State University Billy Ireland Library & Museum are featured along with videos. The exhibition will also include the set and costume designs created for the world premier of Sarasota Opera’s children’s opera Little Nemo in Slumberland November 10th and 11th; the score from the opera by its composer Daron Aric Hagen; the opera’s libretto by J. D. McClatchy; and a short documentary on its production and rehearsals.

Winsor McCay (1867?-1934) worked Cincinnati’s Vine Street Dime Museum and Palace Theater from 1891 to 1900. He then joined the Cincinnati Enquirer as an artist/reporter, and created the comic strip Tales of the Jungle Imps. McCay moved to New York City in 1903, after which he created several comic strips including Dream of the Rarebit Fiend, Little Sammy Sneeze, and Pilgrim’s Progress by Mr. Bunion. His masterwork, Little Nemo in Slumberland, influenced many later cartoonists such as Bill Watterson and Berkley Breathed. McCay was a pioneer animator with his film Gertie, and many of McCay’s comic strips reflect his interest in depicting motion. He drew editorial illustrations for the Hearst newspapers in the latter part of his career.

John Cannizzaro Jr. (born 1943), better known as John Canemaker, is an independent animator, animation historian, author, teacher and lecturer. In 1980, he began teaching and developing the animation program at New York University, Tisch School of the Arts’, Kanbar Institute of Film and Television Department. Since 1988 he has directed the program and is currently a tenured full professor. In 1987 his book, Winsor McCay: His Life and Art, was published.

Chip Kidd (born September 12, 1964) is an American author, editor, and graphic designer, best known for his book covers. Born in Reading, Pennsylvania, Kidd grew up in the Reading suburb of Shillington, strongly influenced by American popular culture. Kidd is as a fan of comic book media, particularly Batman, and has written and designed book covers for several DC Comics publications. In 2010, Kidd collaborated with the writing staff of the animated series Batman: The Brave and the Bold on the episode “Bat-Mite Presents: Batman’s Strangest Cases!” The episode contained a segment that was heavily inspired by the Batman cartoon from the 1960s.

LOCATION Selby Gallery is located on the Ringling College of Art and Design campus, one-half block east of 2700 N. Tamiami Trail on Dr. Martin Luther King, Jr. Way in Sarasota.
All Selby Gallery exhibitions and presentations (and most of our special events) are free and open to the public.