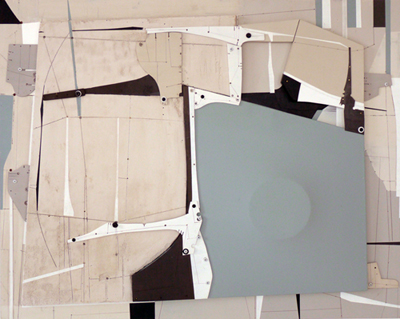 “The artist constructs a new symbol with his brush. This symbol is not a recognizable form of anything which is already finished, already made, already existing in the world―it is a symbol of a new world, which is being built upon and which exists by way of people.” -Eli Lissitzky

New York artist James Kennedy brings his beautifully rendered constructivist works to the Mindy Solomon Gallery from September 15th- October 27th, 2012, with an Opening Reception from 6-8pm and artist talk at 6:30pm on Saturday, September 15th. Kennedy’s paintings to date have consisted of complex spatial arrangements that are both painted and built through a process of hard-edge technique coupled with varying dilutions of media. The result is a unified visceral surface that is so knitted in structure that it is frequently perceived to be collage.

In his forthcoming exhibit at Mindy Solomon Gallery entitled “Constructions and Compositions,” the artist will expand his spatial vocabulary through the use of materials such as shaped canvas, gypsum, styrene, metal and wood veneers. The constructions exhibited alongside recent paintings present carved and painted landscapes that play with the physical dimension of Kennedy’s refined and hard-edge components.

In this media dialogue, shapes are carved, composed, inlaid and joined on surfaces that evoke a more visceral quality. Lines are defined through scoring, painting, and in one work adopting the tensile qualities of wire. The intent is to present imagery that plays with the mind and eye, and ultimately the viewer’s propensity to connect the dots and find a solution. The resulting ‘structures’ present an added dimensionality to Kennedy’s existing architectural and mechanical language while retaining and synthesizing the painting process.

Kennedy’s work is highly sought after, finding homes in important public and private collections all over the United States. Mindy Solomon Gallery is proud to present Kennedy’s first solo exhibition in the Southeast United States.