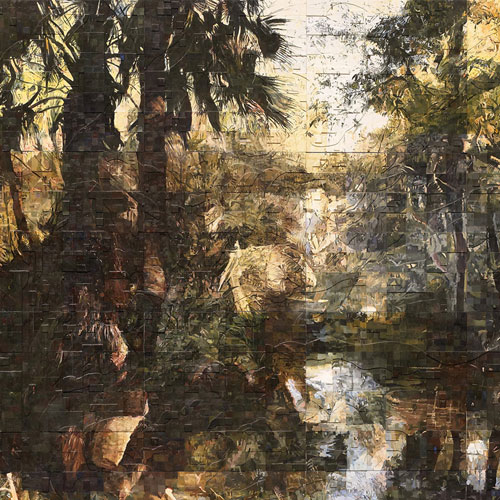 Jake Fernandez graduated from the University of Florida and received his Masters of Fine Arts from the University of South Florida. He is known for creating complex pictorial structures through the observation of light and space. His works are in numerous public and private collections. He is represented by ACA Galleries in New York City. Interview conducted by Pamela Beck.

How does working in a technology-fueled world differ from when you were working in the seventies?

In the seventies I was very interested in the NASA photos of the lunar terrain with its hash marks and lined grids. At the time, I had the contrarian idea of “constructing” a painting from individual fragments to a complete composition, rather than the traditional general to specific method of covering the entire picture plane and refining the image until finished. I thought the “tiling” of colors or seeing digitally, made more sense. Image making technologies in the last thirty years are generally based on this concept.

There’s no question that technological advances have always influenced artists. Many early 20th century artists, like Leger or Sheeler, celebrated the machine by painting them as a glorified subject. But I’m interested in the machine’s process, its modus operandi that traces and reveals its own internal bias. I often mimic the repetitive actions of machines when I work, in order to find my own bias or “fingerprint.”

Who has been of great influence to you and your work?

My earliest and most profound influence came from a man named Osmin Perez (aka Andoba.) He worked for my grandmother in Cuba, where I’m from. He was a gardener by day and a timbalero (musician that plays the timbales) by night. He was humble and uneducated but possessed the powers of a shaman. In addition to being a gifted percussionist, he could communicate with animals, and foretell future events with uncanny accuracy. As a young child Andoba taught me by example the limitations of logic, but more importantly how to live in a magical world of one’s own making, which I think is essential for an artist.

How do you create the 3D quality of your work in paintings like “Myakka Fork” and “Hidden Mandala?”

Most of my paintings have a bas-relief component. By including this shallow three- dimensional surface, a kind of visual shift is produced resulting in a more dynamic visual experience. I build the surfaces (bas-relief) by attaching pieces of wood or building up the surface with plaster. I work each layer independently.
By isolating each pass and concentrating on a singular step at a time I’m able to go into a meditative trance that makes the work more automatic than calculated. The overall geometric patterns of the painting are pre-set but what happens between those parameters is more automatic and intuitive than calculated.

Where did the idea for your photo collage, “The Perpetual Frieze”, come from?

I think the photo-collages were born out of necessity. I worked for years in a basement on Bond St. in NYC and my closest access to nature was a community “garden” on nearby Houston St. and the Bowery. I would photo-document this blighted area, take the photos back to the studio cut and re-assemble the photo fragments into a new configuration.

I found it intriguing that the same photos taken from a decaying urban landscape could be transformed into a lyrical scene by simply relying on my imagination to rearrange the mosaic-like fragments. “The Perpetual Frieze” based on that garden, was started in 1984 and I continue to intermittently add pieces to this day. The piece now measures over 9” x 25 ft in length.

Are their particular themes or ideas that inspire your work?

Inspiration is a concept that I find totally mysterious. In my case it is completely unpredictable. I know not what triggers it.

What are you working on now?

I am currently working on two commissions along with my ‘Trie Garden Project”, which is a series of paintings based on the medieval garden at The Cloisters in NY.

What would be your fantasy exhibition space, a place that feels most in sync with what your work is expressing?

In reality, I am actually planning to install the “Trie Garden Project” in Frank Gehry’s “Upper Room”, which is on the top floor of a building he designed for the St. Monica Church in Santa Monica, California, next year. It’s about thirty-five feet in diameter with curved walls, a domed ceiling and a circular skylight. To me this really is a fantasy come true.

But if the Rothko paintings are ever moved out of the Rothko Chapel …now that would be something.

What do you see as the role of the artist in society today?

To be a shining example of survival against all odds.

What aspects of the contemporary art world would you change if you could?

I would like to see things that are truly extraordinary and less derivative.

If you could pick any people dead or alive to go to dinner with, who would they be and why?

If fictional characters are included then Chance the Gardener from the movie “Being There” because I admire his innocence and irrational optimism, not to mention his suits. Shirley MacLaine’s my other choice. What can I say, she’s Shirley MacLaine.

When you are about finished with a work, do you return to rework it? What makes you know that you’re done and can walk away?

Actually, I never go back and rework a painting. I go through the process, however byzantine, in sequence and don’t “correct” or “refine” the piece. An artist whose name I can’t recall once said, “Paintings are never finished, only abandoned.”

Do you approach your work differently today than thirty years ago?

Not really. I am much more comfortable with the process now.

What would your personal flag look like if one could represent you?

You describe yourself as a dreamer, do you feel like you have anything in common with, say, an accountant?

I have to balance my checkbook.