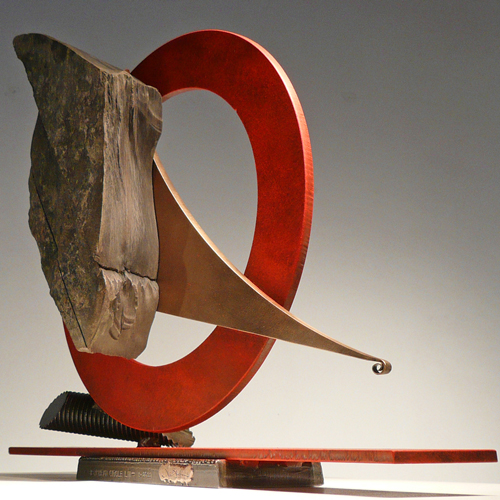 “We’re thrilled that several of these artists, including John Hardy, John Van Alstine, Caroline Ramersdorfer and John Mack, are showing their work in this gallery for the first time,” says Allyn Gallup, founder of Allyn Gallup Contemporary Art.

John Van Alstine’s work has been exhibited widely around the world. He has completed more than a dozen large-scale, site-specific commissions, including a large outdoor piece for the 2008 Olympic Park in Beijing, China, and a 35-foot-tall sculpture for the newly renovated Indianapolis International Airport. His 28-foot work, “Funambulist,” was installed on the Michigan State University campus in 2010. Current projects include a major outdoor piece for a university in Beijing, and a 30-foot-high outdoor sculpture using World Trade Tower steel remnants. Van Alstine is a recipient of numerous grants and fellowships, including from the Gottlieb Foundation, the Pollock-Krasner Foundation, the Tiffany Foundation, and National Endowment for the Arts.

Caroline Ramersdorfer has participated in expositions worldwide and, since 1986, has been commissioned to create numerous site-specific sculptures in urban and park environments. Her works are installed in permanent private and public art collections around the world. In 2006, Ramersdorfer won the Golden Award at the Renaissance and Rising International City of Sculpture and Cultural Year in Zhengzhou, China, and the same year she received the merit award for the Beijing Olympic Sculpture, where her sculpture “Seed of a Unified Spirit” has been permanently installed between the Bird’s Nest Stadium and the Water Cube. The artist says that she “strives to reveal internal structures and layers and use them to construct space from the inside out, from top to bottom; spaces which can be physically traversed yet without actual boundaries.”

John Mack received his BFA from Ringling College of Art & Design in 2007. Exploring themes in science, technology, and science fiction, Mack creates abstract sculptures using a combination of wood and metal. The artist says he attempts “to make connections between what is known and what we have yet to discover. The focus is on connections between our current experiences, the infinite possibilities of the future, imagination, mythology, our indelible curiosity and a personal drive to understand the universe and our place in it.” Mack says he draws inspiration from themes in science and technology, science fiction, and contemporary mythologies to “create fantastic organisms and impossible vessels for fictitious voyages, along with objects involving bizarre future technologies in an effort to satisfy my own fascination with what could be.”

John Hardy is known for his landscapes, seascapes and cityscapes and is a prominent portraitist, as well. He attended Ringling School in the late 1940’s, and has been actively making and showing art for over 50 years. His work can be found in many public collections, including the Brooklyn Museum, High Museum of Art, and the Mint Museum, and is also part of more than a dozen college and university collections. Hardy lives in New York City and East Hampton, Long Island.

A.D. Peters’ imagery is inspired by the land surrounding his studio farm in the heart of Ohio’s Amish country or his travels in the city. Trained in classical painting at The Pennsylvania Academy of The Fine Arts, Peters says he has “honed his skills to a science.” Known for his unique style of “Rust” paintings, Peters uses metal and oil paint in partnership with the natural elements “of water, sun, air and time,” he says. “The works move from the easel in my studio to submersion in my lake to drying on the shore. This oxidation process is continually repeated until the work reaches the desired patina.” Peters’ work has been included in numerous exhibitions and has been collected both nationally and internationally. Peters lives in the Cleveland suburb of Mansfield.

Allyn Gallup, founder and president of Allyn Gallup Contemporary Art, says that these artists “invite viewers to explore the world as it is rarely seen or described. Who knows—you may never see the landscape that surrounds us in same way again.”