Kymia Nawabi will be in Sarasota to speak at New College of Florida. She was gracious enough to provide us with an interview. We are lucky to have such great talent come to our beautiful community, and we are very happy to share this awesome conversation with our readers. 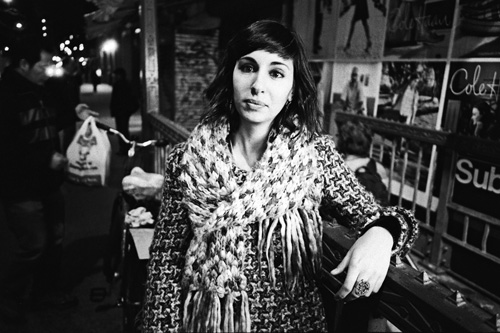 Nawabi, a first-generation Iranian-American artist, earned her MFA from the University of Florida in 2006 and BFA from East Carolina University in 2003. She is the recipient of numerous prestigious residencies and awards including The Keyholder Residency with The Lower East Side Printshop (2012), winner of Bravo’s reality TV series Work of Art: The Next Great Artist (2011), New York Foundation for the Arts (NYFA) Grant and Fellowship in drawing (2009), two-time Swing Space recipient with Lower Manhattan Cultural Council (2009, 2007), Nominee and Fellowship with the Aljira Emerge 10 Program (2008), The Canal Chapter Residency (2007) and The Women’s Studio Workshop Fellowship and Residency (2007).

sVA: What made you want to do Work of Art?

At first, I kind of had no choice in the matter, to be honest. My sister called me and said I had to fill the paperwork out and just try. I thought she was out of her mind! Whenever you apply to anything you always assume there are thousands of other people out there trying to get the same thing you are. I always wonder what the odds are of even getting a chance.

However, once I was told I made it on as a contestant for the show I knew I truly wanted to be on Work of Art. It would be an adventure in my life and more importantly a challenge for my art. As scary, torturous and exciting as an adventure can be sometimes, it still is the most fruitful and exhilarating thing you can do for your soul.

sVA: How has life been in the studio since the end of the show?

I would call it more of an office now than a studio; I am on the computer all day.

There are a ton of emails to reply to daily, interviews to answer and I have also been applying to residencies and grants. As with any job, there is an administrative part to being an artist. I do have project plans for my new works that I feel very eager to be able to get started on, of course.

sVA: Have you been able to try some new materials you could not of previously afford or get a new studio with your prize money?

I am very excited about working with casts taken from my full body. I would like to seriously go into large-scale sculpture. This is a very pricey process and I need to make sure I have the right timing and space to begin it all.

I was just recently awarded the Keyholder residency with The Lower East Side Printshop in NYC where I plan on working on medium to large-scale collagraphs. It has been years since I have been able to revisit this process, as I cannot afford a printing press. I plan on splurging on beautiful, giant sheets of paper and printmaking inks for sure!

sVA: What is your creative process?

Mentally, the process is the same: I take an issue or event that is meaningful to me, investigate it through introspection, reading, writing and conversation, create a mythology containing a world of characters and environments that symbolize the issue metaphorically, and lastly, experiment with color, texture, line, scale… to further push the conceptual framework for the piece(s). The biggest shift I have recently made to my work has been to pair down the elements and palette, which has had a positive effect on the affect of my work. As a multi-disciplinary artist, I work cyclically with drawing, painting and sculpture processes.

sVA: Have you kept up with Bob and Barbara? If so, how are they?

My boyfriend and I have definitely visited Bob and Barbara at their amazing shop back in Cold Spring, NY. They are such amazing people who we fully intend on visiting again this summer sometime soon.

sVA: How would you describe your artistic point of view? What do you hope to communicate through your work?

By observing the essences, behaviors, and appearances of others and myself, I study the peculiarities of individuals, their relationships to one another and their environments. From this stock of my own wonders concerning our world and its inhabitants, my works portray personifications of our human abject experiences, which embody abnormal physical and psychological states. These abnormalities of existence manifest from the interplay of ourselves in our ordinary capacity, versus the occurrences of our daily internal fantasy lives. Fantasy, referring to our mind, soul and body’s intangible, yet real and deep felt phantom world, not sensed by others. These internal phantoms range from our darkest desires and fears, to our uncertainties of time, the fragility of life and what lies beyond this existence. I am fascinated with the mental forms that are conjured up from what we experience within pondering universal phenomena.

Each of my characters and landscapes, as well as their operations, is the representation of these flights of fancies we have as well as the emotional reactions and bodily sensations that occur from having them. It is not where you are or what you are physically doing in the real world that I am interested in, rather where real life places you in your mind’s landscape, who you are and what you are doing there. This is what I am interested in recreating.

Through my allegory of human behavior the viewer is given another realm of reality through my perceptions of what is irrefutable that is often felt but not seen in what we consider the “real world.” Thus, through the lens of my own experiences, obsessions and observations, I direct the viewers’ visions to the complex, deep-level, make-up of who we are, and make us dwell on what we are- the abject human.

On my most recent works:

With a growing curiosity for spirituality, my most recent works of mixed media drawings and sculpture showcase the beginnings of my research on Alchemy, Greek and Egyptian mythology as well as religions from around the world. I have adopted gods, mythological creatures and burial ceremonies from different cultures as a part of my own belief system.

With these new insights, I have invented a mythology of characters, landscapes and metaphors that symbolize death, the afterlife, rebirth, spirits and souls. Ideas such as the philosopher’s stone, a substance that allows base metal to be turned into gold, and the Ouroboros symbolizing eternal rebirth, for example, all materialize within my allegorical works. In these poignant drawings with life-size characters, I present the viewer with moments of enlightened, transcendental states of our existence, and perhaps what happens to us as we pass on.

sVA: Are there any features of your work that are discomforting, for yourself or your viewer?

For myself – never. For the viewer, there used to be. During graduate school I received such wonderful constructive criticism on my work that made me see and make things differently, for the better. For quite some time, I was making a ton of self-portraiture with imagery that was difficult for my viewer to enter. For example, the expression on my face in the drawing would be painful to look at, or the sadness portrayed in my painting would become overwhelming. It was brought to my attention by Professor Richard Heipp that it was, “too much of Kymia in anguish.” He challenged me to speak of the same experiences but with imagery that could leave the works more open-ended and open period for the viewer. This unleashed a whole new way of making art for me. As soon as I removed my portrait, as well as the obvious “one-liners,” my work opened up to a totally new mythology of characters and panoramas that described my life experiences infinitely better. The works became less about a self-portrait and more about the world I lived in, which others found a relationship to in the most spectacularly interesting way.

sVA: What is next on your agenda?

My agenda is plain but not simple: to make work. I cannot wait to get into the studio!