Claudia Ryan is one of the major female abstracts artists in the Sarasota/Bradenton area. A 2006 graduate of USF’s MFA program and Ringling College Graduate, Ryan has shown with Allyn Gallup Contemporary Art, the Clayton Galleries, Bleu Acier Gallery, and currently lives and works in Bradenton, Florida. 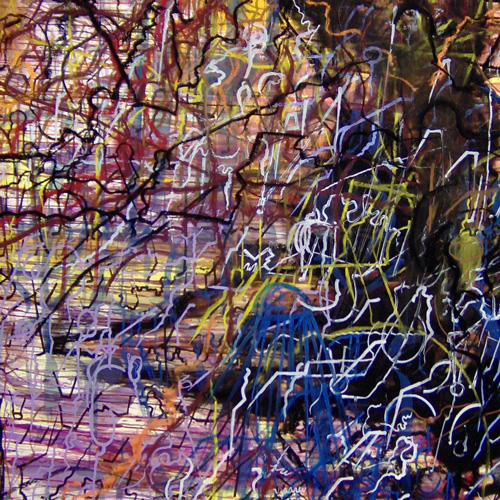 Claudia Ryan is one of the major female abstracts artists in the Sarasota / Bradenton area. A 2006 graduate of USF’s MFA program and Ringling College Graduate, Ryan has shown with Allyn Gallup Contemporary Art, the Clayton Galleries, Bleu Acier Gallery, and currently lives and works in Bradenton, Florida. At 60, her grand and intense, yet personal style of painting, revels a complex and impressive voice of art today. Below is an interview with the artist.

sVA: What are you currently working on?

Currently, I am working on large drawings. I feel closest to my drawings, which are really a mixture of painting and drawing. I work a lot on paper. It’s a faster release for me to work quickly in a drawing mode on a large piece of paper with a piece of charcoal or pastel, even though I use liquid media too.

I work from my imagination from the inside out, rather than from direct observation. I like drawing with the movement of my whole body. I feel that I connect faster to my unconscious that way. If I start to be too aware about what I am doing, things usuallly don’t work out. My work is an ongoing process. I just think of it as something I do.

sVA: In your lifetime, you have experienced or been witness to many events, people, and places. Does one or some of these have more influence on your work than others?

I am fairly old I guess, I’ll be 60 on my next birthday so, yes, that’s a long time. Really it’s all like a big blob in my head. Sometimes I think there is nothing that can compare to what is happening in the present, especially the events of the last ten years, but then the present is sometimes the most unclear or scariest thing for me to focus on. I am always nervous about things, about the future, but I am trapped in the past most of the time. There are a lot of timelines in there running in me, all existing simultaneously. I mean, I carry the past with me, like everybody else, and it just follows along, but I think the sixties, and in particular the British invasion of popular culture in the US, had the biggest effect on me. The Beatles were the most exciting thing that ever happened to me, even though that seems funny to say! I started to notice art and be aware of art history at that time, between the ages of 11 and 14. Art was like this big container opening up in my life and a great discovery and I felt like this whole conversation could contain me and it was the first thing that really made sense, even though I was going through a lot of personal emotional tumult.

I wasn’t discretionary then at all between “high” and “low” art. It was that moment when everything mixed in me in this very intense visual way: the Keane girl paintings at the mall with their big eyes and Mary Quant styles, Milton Glaser/ Seymour Chwast posters all combined with Van Gogh and Francis Bacon and Bellini and Vermeer. There was the whole Pop and Op style thing with its incredibly kinetic lines and bright colors that infused fashion and music and movies, and there were all those album covers.

I was painfully shy and going through adolescence, and I remember dying inside this electric yellow plastic raincoat. It is all in my head together, everything a big mix just like now, that whole era with its terrible dark parts and light parts, sort of everything, like riding on this big wave. I remember attending the New York World’s Fair in 1964 and filing past the Pieta on a conveyer belt. They had the sculpture shipped over in this special, unsinkable container. It sounds crazy now. There was still a feeling then of everything progressing towards some modern utopian-Jetson cartoon type of paradise. But that whole narrative was really starting to seriously fall away about that time too, and the pressure of that collapsing is still an enormous influence on my outlook.

sVA: What currently inspires you to paint?

sVA: What do you think of when you create?

I am doubting what I am doing is any good all the time, because most of it isn’t any good, in fact I am surprised most of the time by how little I have to show for myself as an artist.

sVA: What elements do you consider most important in your work?

Lines and colors. Black is very important, I can’t seem to do without it. I try sometimes to leave it out, just to see if I can.

sVA: Does the Sarasota-Bradenton art scene have any influence on your work?

I am still a pretty shy person and I hole up in my studio, so I admit social interaction is never high on my list of things.

I drive up and down 41 a lot because of my job, and I am always noticing what has changed and what’s still there after the 40 some years that I’ve lived here off and on. It’s a fantasticly weird jumble of time and images that goes through my head. It’s kind of scary! My favorite thing is driving by the airport at night or very early morning.

This area – the artists mentors I’ve met here – have been nurturing to me. Almost since I came back, I was able to make prints in the shop at Ringling College, and I was helped so much and welcomed. And when I enrolled in Ringling finally to finish my degree, the friends I made and artists I met, some who live and work here still, have enriched my existence. I count my blessings. I’ve been very fortunate to live here, and that’s an understatement.

Also, when I returned in the late eighties the gallery scene here was still pretty active, like it was in many places then, and I benefited directly from that. Things seem to be pretty exciting right now with a new generation of artists and the promise of a Contemporary Art Museum in the future. I wonder what that will be like.

sVA: What role does history play in your work if any?

I feel like a historical invention sometimes, or that history is always inventing me somehow. I want to invent my own history.

sVA: How important are titles in your work, and if so where do they come from?

I often envy titles in others work. Titles can really complement a piece. Aso they help in an archival sense, I mean in keeping track of things. This question of titled/untitled used to really bother me!

I remember reading an artist once being interviewed about this and they said they believed the caption”Untitled” was really a title, in a bad sort of way, I mean, like a kind of dead code or a pose, or something.

Now, I dont think its so important, so I am not wasting time worrying over it. I rarely title my work.

sVA: It always varies from one artist to the next. How do you know when a work of yours is complete?

I have to go away from it for a little while, and if it holds up upon my return, then, well, maybe, or I keep repeatting this action. Sometimes you can be too close and you can’t even see something you’ve done, or the opposite, you are reading too much into it and it falls empty and flat. Actually sometimes I don’t know. Sometimes if somebody else sees something and thinks its done, then I think it’s done. Sometimes I throw it out I hate it so much. I’m a wimp at decision making.

sVA: What is in the future for Claudia Ryan and her work?