Now – May 6, 2012
An exhibit at the Tampa Museum of Art showing a series of “cybernetic metaphors” that focus on the future problems that DNA mixing might cause. These metaphors take the form of collages of signals or warning of things going wrong 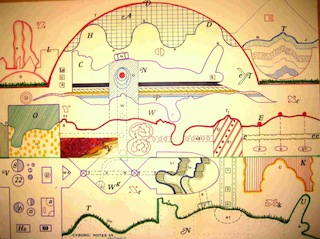 Don ZanFagna (born 1929) has been active since the 1950s and is known for his stunning works that fuse creativity with futuristic warnings. Between 1968 and 1974, ZanFagna created Cyborg Notes, a series of “cybernetic metaphors” that focus on the future problems that DNA mixing might cause. These metaphors take the form of collages of signals or warning of things going wrong. According to the artist, “these works incorporate humans and machines, cloning, eco-architecture and landscape, biology and technology and make use of dark humor, skepticism, irony, and futuristic symbolism.” The resulting Cyborg environment that ZanFagna constructs shows entities that have lost their humanity and sexuality, but mechanically still reproduce new “humans” replete with nuts, bolts, and robotic controls. This will be the only second exhibition of ZanFagna’s work in the last 30 years.

A Rhode Island native, ZanFagna holds advanced degrees from the Universities of Michigan and Southern California in painting, art, and architecture. He earned a Fulbright/Italian Government Grant for study in Italy in 1956-57 and later chaired the art department at Rutgers University and was visiting eco-architecture professor at Pratt Institute. His work is represented in private collections and has been exhibited in more than 200 museums in the U.S. and Europe. A pioneer in environmentally sound practices, he founded CEASE (Center for Ecological Action to Save the Environment), and was a speaker, along with Ralph Nader, Margaret Mead, and other well-known environmental activists, at New York’s first Earth Day Teach-In at Union Square in New York in 1970.