I overheard Wang explain that wontons were often considered a migrant’s food. Wang expertly uses common imagery to start a dialogue but wisely refrains from dominating the conversation. With a few familiar images he conjures heavy issues such as food and eating, sustainability, violence, labor, natural resources, death. 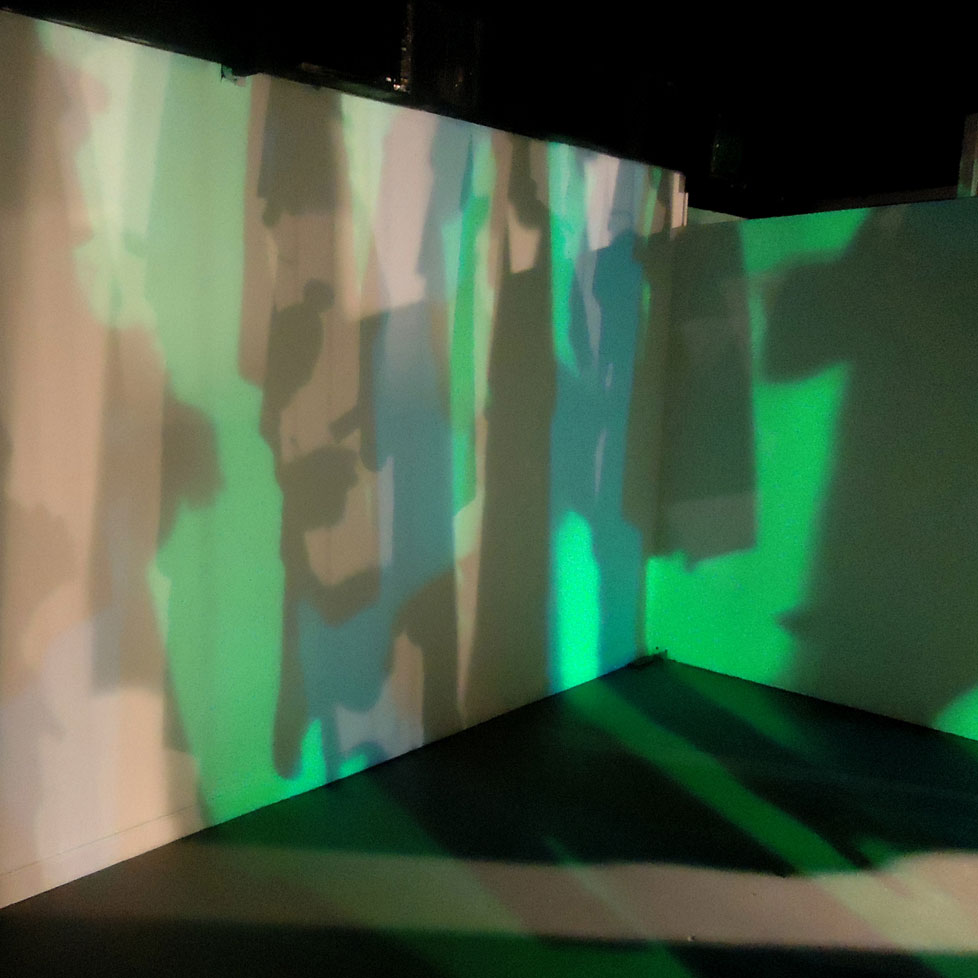 We’re not scientists. We’re not here to solve problems. Kirk Ke Wang was referring to artists when he said this, his hand resting on the head of a toy animal at the business end of a noose. Like the issues it addresses, his installation, Last Meal, at St. Petersburg’s Salt Creek Artworks is much more complex and ambiguous than it may first appear.

Two groups of 100 toy animals hang from nooses in neat rows and columns throughout the gallery. I found it interesting that my first impression of the scene was that of a mass execution, though it soon became clear it represents a mass suicide – an integral difference. Multicolored lights flick on and off responding to movement and creating sinister shadows. The idea of the circumstances that would lead to an animal’s self-annihilation is frightening and similarly Wang’s work exudes hopelessness. The message these “animals” are communicating by their death is undoubtedly a grim one.

Countering the morbidity (or perhaps emphasizing it, depending on your reading) is the fact the toy animals are clearly not real animals but rather felt or fleece blankets with cartoonish heads attached and a large letter sewn on each animal. The letters on the two groups of animals correspond to two word search puzzles that are distributed at the entrance to the gallery. One puzzle features words such as “delicious”, “nutrition”, and “tender” and the other words like “bloody”, “painful”, and “rancid”. The letters of each puzzle correspond to the two groups of hung animals, transforming the “massacre” into a kind of game.

At the center of the installation, in between the two groups of animals, is a low platform that resembles a dinner table covered with ceramic wontons in a spiral formation. A small video monitor displaying the inside of a boiling pot is embedded in the platform at the center of the wontons. Ceramic wontons on a beach are projected onto a screen in front of the platform. As the tide comes in, the water soaks the wontons and returns to the sea red, resembling blood.

As I watched a wave cover the rows of dumplings and withdraw as bloody water, I overheard Wang explain that wontons were often considered a migrant’s food. The wontons connect conceptually with the hanging animals – both food sources portrayed as somehow synthetic, hyper-standardized and imbued with violence from its conception. Wang expertly uses common imagery to start a dialogue but wisely refrains from dominating the conversation.

With a few familiar images he conjures heavy issues such as food and eating, sustainability, violence, labor, natural resources, death. Last Meal reveals little by way of opinion. Actually, for nearly every perceptible opinion, Wang manages to present a converse opinion. In this way Wang was right: the work doesn’t solve any problems. It barely even mentions them. However, it doesn’t merely inspire beard-scratching-faux contemplation. Last Meal requires a walk through the gallery, physical engagement, conversation. Artists aren’t scientists. Artists are at the front starting the dialogue in the first place. And they’re in back constantly pushing it forward.