January 7 – March 18, 2012
Ninety-seven year old artist William Pachner has been one of the major forces in the development of the Tampa Bay region’s art scene. This exhibition of Pachner’s work focuses on the important decade of the 1960s. 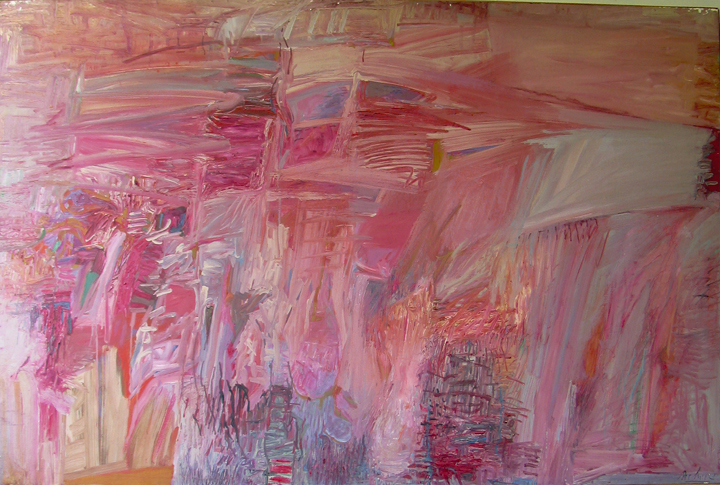 Ninety-seven year old artist William Pachner (b. 1914) has been one of the major forces in the development of the Tampa Bay region’s art scene. This exhibition of Pachner’s work focuses on the important decade of the 1960s. During this period, Pachner split his time between the Tampa Bay region and Woodstock, New York and explored abstraction as a vocabulary to come to terms with his complicated personal history and his newfound freedom of expression.

Pachner, a native of Czechoslovakia, had a childhood characterized by tragedy. He lost 80 members of his family in the Holocaust. This fact shaped both his humanity and his approach to painting. He has consistently returned to motifs that reference the brutality of the Holocaust; in particular, the train became a symbol for the journey that led many Jews to their deaths. He emigrated to the United States and became an artist on staff of Esquire magazine during the 1940s. After a couple of years, however, Pachner left the magazine and dedicated himself full-time to painting and teaching. In 1951, Pachner began to live and work in Florida for part of the year. This same year, he was appointed instructor of painting and drawing at the Florida Gulf Coast Art Center in Clearwater, and in 1956, the Center appointed him director of the art program. The following year, he began teaching at the Tampa Art Institute and established the William Pachner School of Art in Clearwater. He was celebrated in 1959 with a retrospective exhibition circulated by the American Federation of Arts.

For a generation of art students and aficionados, Pachner symbolized this region’s growing connection to the art world of New York, and his full embrace of abstraction pushed many to explore the genre. Beginning in the 1960s, he was one of the few abstract painters to be championed by the Florida art community, and his work attracted a small, but dedicated, following. Writing in 1966 about an exhibition of Pachner’s paintings in Jacksonville, art critic Elihu Edelson called Pachner, the “best artist in Florida.”

The Museum celebrates the triumphant art of William Pachner – artist, teacher, and visionary.