Dion replicates the natural through drawings, paintings, and screen-printed images with an ease that only an artist of his caliber could create … aiming for viewer to travel throughout history in an ecologically-themed show. 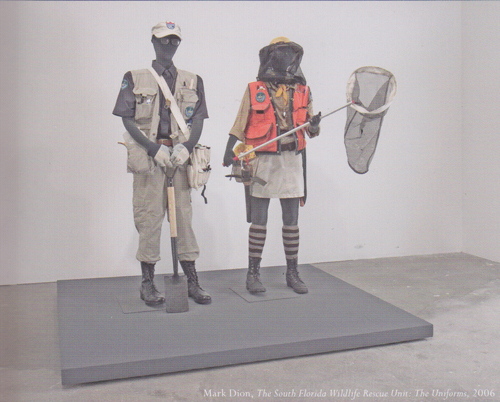 Mark Dion’s Troubleshooting, located at the Contemporary Art Museum on the University of South Florida’s Tampa campus, exhibits a total of thirty-eight pieces– five of which are by John Kunkel Small and one in collaboration with Dana Sherwood. The show explores flora and fauna, the effect that humans have on nature, and the personal interest Dion has in both wunderkammern and historical explorations. Dion replicates the natural through drawings, paintings, and screen-printed images with an ease that only an artist of his caliber could create, unfortunately his instillations failed to fit-in. 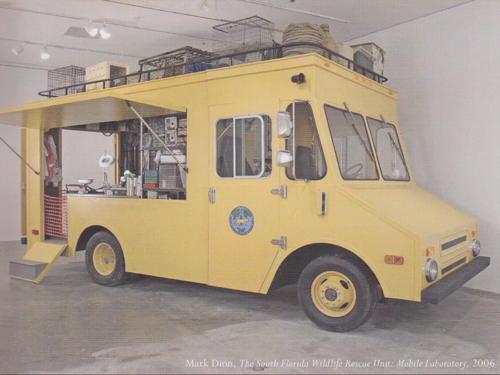 Throughout the exhibition the underlying themes of the Florida’s wildlife are explored through multiple installations, the most publicized being Travels of William Bartram Reconsidered (2008) and The South Florida Wildlife Rescue Unit (2006). Travels of William Bartram Reconsidered is a wunderkammer (curiosity cabinet) filled with campy trinkets, in the form of alligators. Filled with the all-too stereotypical symbols that immediately recall Floridian lifestyle, these alligators make a connection to the wildlife William Bartram documented in the late 1800s. Being a Florida native I can attest to alligators serving an important part in a Floridian’s lifestyle: a popular design for tourists traps- at least there were no pink-flamingo or palm tree cabinets! Surprisingly, there were not more cabinets of animals around the museum space even though Dion notes in his label of Travels of William Bartram Reconsidered that alligators are one of the animals that people affect. 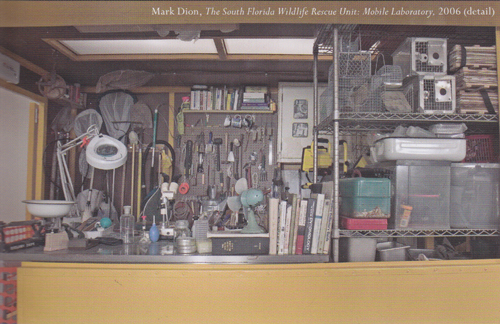 The Terror of Transylvania (1998), Herbarium (2010) and, Herbarium Perrine (Marine Algae) (2006) are a few of Dion’s more thought-provoking and visually entertaining pieces. The Terror of Transylvania (1998) is a silkscreen of a traditional circus poster that captures ideas of the effect humans and the art world have on wildlife through a historically relevant medium. Herbarium (2010) is a series of seven-image highly veristic, ornate hand-painted images, while Herbarium Perrine (2006) consists of two portfolios filled with individually pressed seaweed, both revealing Dion’s painstaking devotion for accuracy and allowing the viewer to see into Dion’s nostalgic mind. 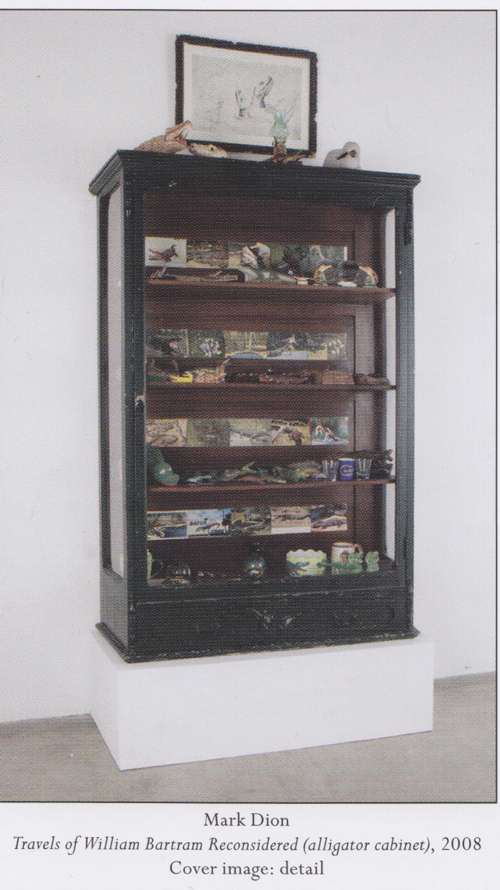 Dion’s Troubleshooting aims for viewer to travel throughout history with him in an ecologically-themed show. Jane Simon, curator of USF Contemporary Art Museum, states that Dion produces, “works that focus on congested ground between the natural and the cultural, often revealing the rift between common perception and scientific theory.” After my experience with Dion’s Troubleshooting, I felt it contradicted the rift between traditional forms of art-making and the ever-demanding contemporary art world, which emphasizes monumentality over the quality of art. Unfortunately, the pieces that show Dion’s political and personal message that resonate on an intimate level are lost amongst his urge to succumb to the shock factor that is preeminent in the eye-catching truck and awkwardly creepy taxidermic animals.