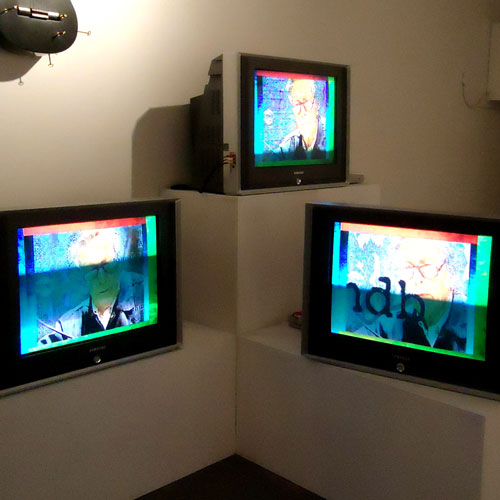 Nearly 100 years after his birth and 20 years since his death John Cage’s relevancy to the current creative world is as strong as it’s ever been. To be sure, Tempus Projects’ Things Not Seen Before: A Tribute to John Cage isn’t so much an exhibit of work by Cage as it is a display of his continuing reach and influence.

The composer, writer, artist, and philosopher, John Cage has been among the foremost avant-garde artists of the second half of the 20th century. Curator, Jade Dellinger and artist run gallery, Tempus Projects bring Cage to Tampa as part of his centenary. The contrast is inevitable: the tiny garage art space and the avant-garde art giant. However, together they’ve compellingly fit the spirit of Cage into a little gallery in the Seminole Heights neighborhood of Tampa.

To walk into the space I literally passed through John Cage: Tampa’s Theo Wujcik’s portrait of Cage which was cut into strips and hung as an appropriate entrance. Scattered on the walls (Dellinger honestly arranged the work by blindly throwing darts at the walls) is work created by, inspired by, and paying homage to John Cage. The content of the exhibit and its (dis)organization underscores the way Cage took the idea of play seriously and his fondness for chance. Even the records spun by the DJ in the corner reflected this with music across decades and genres, often substituting lyrics, with sexual moans and yelps.

Included in the exhibit’s additional programming was a disorienting and engaging “cine-performance” from filmmaker/artist Robbie Land. Seats were arranged to face Land and his cluttered table rather than the screen that his film was projected on (which was placed behind the audience). Beside Land was a close up projection of his equipment as he operated and manipulated it. Outside the gallery, the entire performance was projected on the side of a neighboring building. As soon as Land’s equipment whirred to life it faded to silence again. I thought the power had gone out. Rather, the spools of film that Land was manually turning seemed to power the entire set up. He started and stopped, sped up and slowed down the film shifting everyone’s focus from one screen to the next and keeping the subject of the artwork ambiguous. Land’s use (or misuse) of his projectors and mixers is reminiscent of the innovative way hip-hop artists hijacked turntables.

Obviously, this exhibit ran the risk of being overly ambitious, of mismatching the work and the venue. Instead it brings a measure of intimacy not usually found with an artist or work with this level of acclaim. You have one last opportunity to view the exhibit. The closing reception for Tempus Projects’ Things Not Seen Before: A Tribute to John Cage and a performance of Wall Music by the USF School of Music will be held on Saturday 2/04 at 7pm.

This article is provided by Tampa Correspondent, Danny Olda, publisher of Art at Bay.

One thought on “Olda Reviews: Things Not Seen Before”