January 28 – February 4, 2012
JohnSimsProjects presents the first event of the Art and Poetry Salon Series featuring the exhibition, Things could hove been different by Aaron Blackall with poetic response by Matt “Matteo” Kelly. 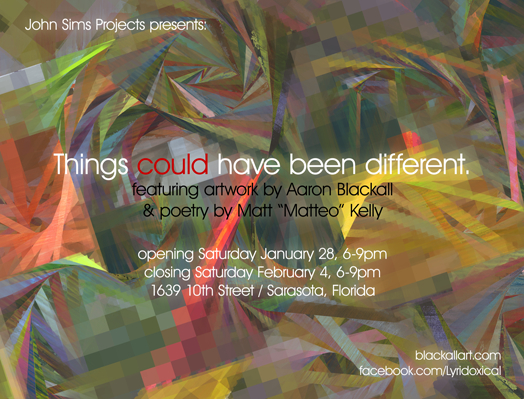 JohnSimsProjects presents the first event of the Art and Poetry Salon Series featuring the exhibition, Things could hove been different by Aaron Blackall with poetic response by Matt “Matteo” Kelly. The exhibition explores the idea of how one decision affects the next in diminishing impact as processes are completed and consequences are revealed. The resulting work is a study in the layering of color in hard edged abstract form which would have been altered had any one of a sequence of decisions been made differently.

In addition to original artwork, the artist and poet have created a series of prints that collage images and text. These paintings and prints will be available for collection.

Aaron Blackall: As an artist, the questions of how and why have always been just as important as what. In practice, this leads to a conscious effort to push the piece beyond its tangible elements and onto a more conceptual plane. After studying art at Western Michigan University and relocating to Florida in 2006, the artistic process became a focus for experimentation. www.blackallart.com aaron.blackall@gmail.com

Matt “Matteo” Kelly: And a poetic response by local slam poet and lyricist Matt “Matteo’ Kelly. Matteo was born in California and raised in Florida. He’s hosted open mics, slam poetry nights and hundreds of shows and events in his tiny town of Sarasota. Now he mainly focuses on his band SNAPM as the lead Singer/MC which has played with some of the best acts around. Such as: Del the Funky Homosapien, members of Wu-Tang, BaIlYnoo, and the list goes on. Matteoworldwide@gmail.com

The Art and Poetry Studio Series is sponsored by John Sims Projects and curated by John Sims. The aim of the series is to connect images and text via a collaborative call and response dynamic between the Artist and Poet.