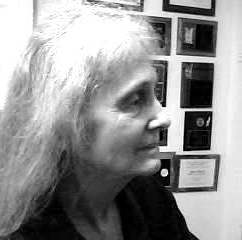 Fury sits beneath these words.

You want to talk “Sarasota Master Art”? Let’s name names that come with bona fides. There’s no need to look very far. The “Artists Who Made Sarasota Famous” show now on view at Art Center Sarasota tells the story.

More than 60 years ago, the town boasted art luminaries like Helen Sawyer, who New York Times writer Elizabeth Luther Cary compared to Francisco Goya. In the comparison, Cary found Goya’s wanting when it came to skies. “We may think of Goya’s carnival scenes under stormy skies,” Cary wrote, “but I cannot recall any by Goya in which the battle of the two extremes plays such a passionate part.”

And after Life Magazine tagged Jon Corbino “the Rubens of New England” and he got two Guggenheim Fellowships, was elected a member of the National Academy of Design, and received the first grant awarded to a visual artist from the prestigious National Institute of Art and Letters, he, too, joined the Sarasota art community.

Then there are the latter-day “masters” like sculptor John Chamberlain. In the early ‘80s, he moved to an 18,000-square-foot warehouse studio on Cocoanut Avenue to make the grand scale work for which he’s celebrated. The Guggenheim Museum is mounting a retro beginning next month.

There’s no point going on with this list. If “master art” has to be explained to you at this point, it’s too late. Your effort to edify a patently obvious marketing strategy under the banner “Sarasota Masters Art” disserves the town, vulgarizes it and makes it some Anywhere, U.S.A. out to drum up business.

Check your press releases for hype, DMA. From where I sit, it’s just gray scud on the page.

P.S. Are the lights fading on fine art in Sarasota? Given what you’re doing, like a setting sun – slowly but inexorably.

Joan Altabe, former visual arts critic for the Sarasota Herald-Tribune and the Bradenton Herald, former New York City art teacher and longtime award-winning art and architecture critic for U.S. and overseas publications, is referenced in “Who’s Who in American Art” and “Who’s Who of American Women” and currently writes as the St. Petersburg art Examiner and National art Examiner.