January 28 – February 11, 2012
Fine Arts Professor will be showing recent paintings in the Willis Smith Gallery for the Academic Center at Ringling College. 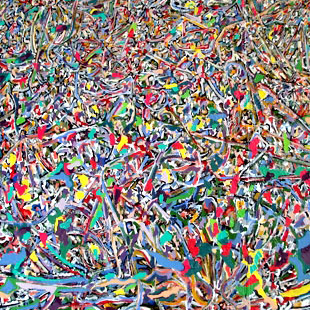 Colors are organized into groups of shapes with an arrangement that maximizes the space the marks occupy. The visual elements portraying familiar subjects are comprised from studies of community behaviors emphasizing consumption. Each piece has a theme developed from personal experiences and states of being. The two paintings – Bees and Crops were created as a pair to speak directly with each other about pollination and automobiles.

Michael Wyshock received a BFA from the University of Delaware in 1998, and a MFA from Florida State University in 2002. His paintings and videos have been presented in over 100 exhibitions.

In 2006, his work in painting was recognized with a Pollock-Krasner Award. In the Fall of 2011, his work was included in a few exhibitions in New York City: a theater production in the East Village at the Connelly Theatre, the Big Screen Plaza in midtown Manhattan, and in the Unfold exhibition at Parsons. In December 2011, his work was nominated for an award from Madatac and presented as part of a special exhibition in Madrid, Spain at the Reina Sofia Museum. Also in 2011, his work was included in exhibitions at the Wheeler Arts Community Center in Indiana, the International Environmental Film Festival in Barcelona, Spain and in Mexico City, Mexico and at the Grand Isle Community Center in Louisiana. He currently lives in Sarasota, Florida where he teaches in Fine Arts for Ringling College of Art and Design.

The Gallery is closed on Sundays