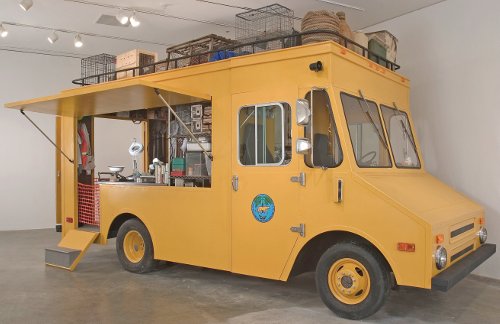 Mark Dion creates drawings, prints, cabinets of curiosity, and installations about the discrepancy between perceived knowledge and scientific inquiry. His works address embedded ideologies in history, often personified by famous figures, as well as important social and environmental sites.

Troubleshooting is a survey of focus on Florida. These works, some of which trace the travels of noted American naturalist William Bartram (1739 – 1823), range from cabinets of alligator ephemera to a collection of tools for a scientist in the field. Some of the works imagine what Bartram saw and collected in Colonial American in addition to revealing how Dion himself encountered the vestiges of a quickly disappearing natural world. Dion has also created work about horticulturist Henry Perrine, who introduced plants such as agave to Florida’s coastal areas. Dion’s comprehensive installation, South Florida Wildlife Rescue Unit – Mobile Unit, 2088, is an emergency truck for threatened species, replete with safari-like clothing and bait for invasive animal species. Dion’s truck would enable activists to rescue endangered flora, but it also displays historical images by American botanist John Kunkel Small (1869 – 1938), of pillaged orchids, bromeliads, and cacti.

Mark Dion: Troubleshooting is organized by USF Contemporary Art Museum, Tampa and is made possible by assistance from the Arts Council of Hillsborough County and the Board of County Commissioners.