Director and curator of Selby Gallery, Kevin Dean, discusses the background to the gallery’s current exhibited artist and work. 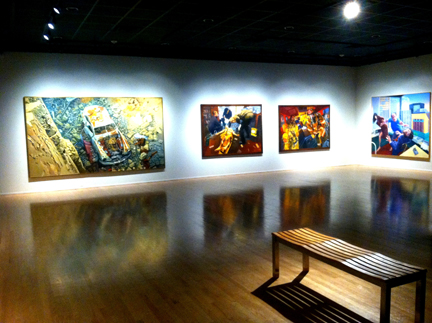 As the son of a successful Dutch painter and illustrator (Jaap Pander) who grew up in Frans Hals hometown of Haarlem, Henk Pander was surrounded by art from the time he was born in 1937. His childhood memories include fear and constant hunger after the German blitzkrieg (that began on May 10, 1940) defeated what resistance the Dutch could mount in just six days. Beginning in the 1980s Pander began turning those memories into large-scale paintings that are both personal and universal; the German uniforms and weapons he depicts are clearly of the period, but they’re not exact reproductions an illustrator of military history would paint any more than the uniforms and weapons of the French soldiers who are murdering innocent Spaniards are in Goya’s Third of May, 1808. The subject beyond the memories is the insanity and brutality of war.

Pander was trained at the Rijksacademie van Beelende Kunsten in Amsterdam where he was also able to see and study the art of the Golden Age of Dutch painting. Like Rembrandt, Hals, and Vermeer he paints portraits, produces still lifes like Willem Claesz, landscapes like Jacob van Ruisdael, and history paintings, which became Rembrandt’s primary interest and one of the reasons he nearly went broke. (There wasn’t much of a market in the Netherlands for history paintings in the 17th century.) That said, if you’re forming visions of paintings by Henk Pander that look like the work of all of the above forget it. There are hints of the artist’s Dutch heritage in his paintings and even though he was trained at a European academy much of Pander’s work would disturb traditionalists who think art started to go bad when Manet painted his Olympia.

After moving to Portland, Oregon to stay in 1965 his paintings and drawings became increasingly expressionistic with touches of surrealism that sometimes dealt with a sexuality that would not have created a problem in cosmopolitan Amsterdam but created a controversy in provincial Portland. Being called a depraved pornographer in the press did nothing to help him sell his work, which the artist depended on (along with food stamps) to live since he decided not to teach. But it was the ’60s and the sexual and social revolution was coming to the western Oregon. (Portland’s newspaper The Oregonian now refers to Pander as “One of our most treasured artists.”) Pender began producing expressionistic posters and illustrations for organizations and working for a new experimental theater as a set and costume designer that were intentionally pushing the boundaries of acceptability in polite society. In the meantime he continued to develop his painting style(s) and came to an acceptable compromise with himself. He would do portrait commissions but like Rembrandt in his middle career they had to be on his own terms: it would be hard to find official portraits of any governors like the ones he produced for Tom McCall and John Kitzhaber that are hanging in the capitol building in Salem.

Pander is also a master watercolorist who produces incredible still lifes that have a wide appeal but are almost deceptively unusual when you study them. Commissions for public art projects also have kept him from having to resort to teaching to eat and give him the capacity to do the large-scale paintings that require more sophisticated sensibilities and a knowledge of art history to be fully appreciated.

One of his public art projects was to travel around Portland with the city’s emergency ambulances, firemen and the police. He filled sketchbooks with his drawings of what he saw for a series of paintings that were displayed in public, and then a series of drawings, paintings and watercolors that often bordered on the bizarre, examples of which are in the Selby Gallery exhibition. The latter images subvert illustration for the sake of art yet provide accurate records of the events depicted with symbolic additions. The realism Pander used in his ten to 12 foot wide paintings of the clean up efforts after the destruction of the World Trade Center and long abandoned rooms in Nazi death camps was grim enough to make his pointed statements on the political realities of life in our time.

Because of the size of the paintings, their rich color and often strange but disturbingly objective imagery, the work is overwhelming as soon as you walk in the gallery. Although they look “realistic” the canvases consist of expressive painterly brushstrokes when viewed in close proximity to the huge canvases. And the spaces he creates subtly warp reality to the point of bending it at times. Because Pander has used art history as the foundation for his work he’s arguably as much of a postmodernist as the painters who began drawing on the art of the past in the 1980s. Enough words, pictures are worth a thousand words than: viddy well, droogs.

Henk Pander Sees All, Paints All

Selby Gallery, Ringling College of Art and Design
(Located one half block east of Tamiami Trail on Dr. Martin Luther King, Jr. Way.)
The gallery is free and open to the public from 10 am to 4 pm (Tuesday till 7 p.m.)
Group tours are available by calling Selby Gallery at 359.7563