February 3 – February 27, 2012
An exhibit showing “our paradise of light and color”, a masterful series of Sarasota paintings. 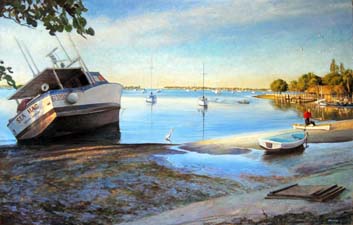 After his recent move from New York, making Sarasota his home, Griffin has immersed himself in what he calls “our paradise of light and color”, and has created a masterful series of Sarasota paintings.

James Griffin was born 1949 in Kitchener, Ontario. Experiencing a culturally diverse childhood while living in the United States, Peru, England and Brazil, combined with his early expressions of creative talent, James was primed for a career as an artist. After acquiring a Bachelor of Fine Arts from Pratt Institute in 1972, he was on his way.

During Griffin’s 36 year career as a freelance artist and illustrator he has created over 3500 illustrations with a concentrated focus on book covers. Recognizing his talent, dedication and passion most major publishers including Random House, Harper Collins, Viking Penguin, Berkley Books, St. Martins Press, Harlequin, Zondervan, Scholastic Books and many others have chosen James Griffin to bring their books to life.

One thought on “James Griffin: Luminous Color, A Journey”