Acclaimed Sarasota artist and sculptor, Jack Dowd, a contemporary social realist known for his affection, humor, and satiric wit of eccentric innocently hilarious full size figures, has shifted focus from the lighter lesser known individuals to a introspective examination in a new series of large scale drawings of The 27 Club. 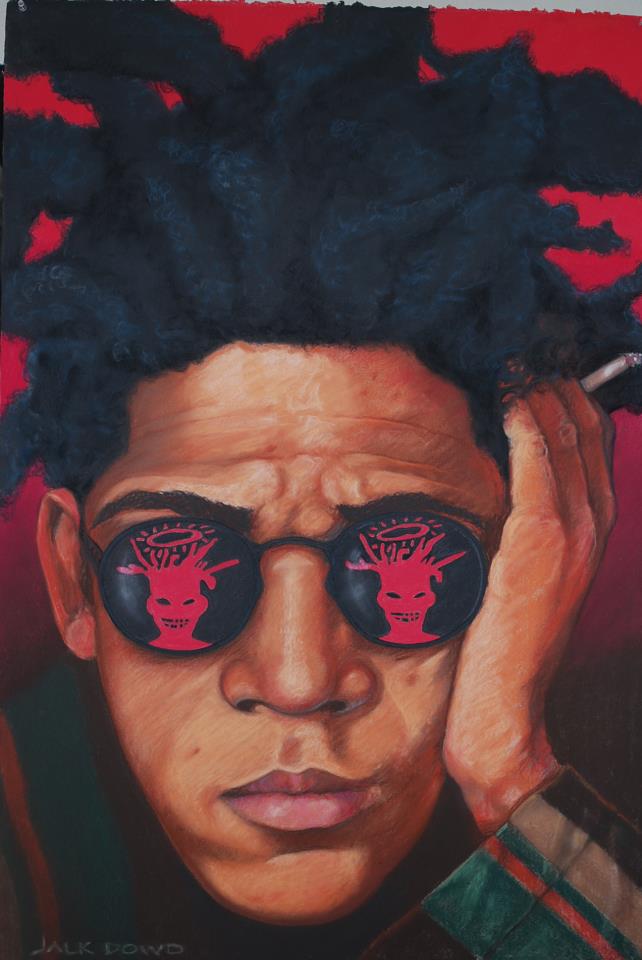 Neil Young once said, “It’s better to burn out than to fade away,” a sentence that would later be found in a suicide note written by Kurt Cobain. Cobain was the 9th member of the The 27 Club — also occasionally known as the Forever 27 Club, Club 27, or The Curse of 27. The 27 Club is a phenomena regarding popular cultural figures who all died at the age of 27.

Acclaimed Sarasota artist and sculptor, Jack Dowd, a contemporary social realist known for his affection, humor, and satiric wit of eccentric innocently hilarious full size figures, has shifted focus from the lighter lesser known individuals to a introspective examination in a new series of large scale drawings of The 27 Club.

This colorful well rendered series titled 27: When the Music Died, consists of 10 iconic names synonymous with the “rock and roll lifestyle”, focusing on the inner lives, wishes and fears, impulses and inhibitions that provided the musicians studied personalities. It is through each of these immortal personalities that a psychological landscape is reveled- producing a rich, individual picture of the style and substance of the inner life of each. This installation exhibition is accompanied with continuous segments of their songs, stories, chronicles, wild tales, incites, and epilogues of their brief, and tumultuous lives. ”27” is a hypnotic and penetrating exhibit of visual, musical, and literal dimensions.

Sarasota Visual Art was fortunate to have the first one-on-one interview with Dowd about the newest works.

sVA: These drawings seem to convey an emotional charge -a process of working out personal thoughts and feelings towards this phenomena. How did you come to the 27 Club over some other subject?

JD: This project is very personal, their songs were the music of my generation. I woke in the morning, went through the day (good or bad) and slept at night with their sounds filling my head. We danced to their music when we wed, I sang their songs to my children when they couldn’t sleep, and they kept us company on those long car trips. They were my idols, my hero’s, my friends. They gave all that to me, and now they are gone! But their music remains in my head and heart, “forever 27”.

sVA: On one hand, each drawing seems to be a fixed physical record of each “member” of this club, but then the drawings as a series seem to create a new set of associations that say something about the entirety and relationships of the “club”. How do you prefer this series to be viewed or experienced?

JD: “27” exhibition is not a memorial, but a celebration of 10 great musicians who knowingly paid the ultimate price because that is how they had to do it. They just had to live their potential 70 years in a fast forward 27 years, their gift was our gift, so please take it! View this exhibition as you would any other that is entertaining, tells a story, and makes you a little smarter. A little more understanding and a better person, than before you walked in.

sVA: Did you form emotional or psychological relationships and/or did any of your personal feelings on the subject matter seep into the art?

JD: In the mid 1960’s, I was a musician in a successful rock band in and around NYC. I rode that bubble associated with the rock star image. Early on I chose another path and escaped before the bubble burst.

sVA: Regarding the process of the actual drawing, do you employ any specific technique to achieve the smoothness and photographic quality of your images?

JD: Each painting presented a different challenge. I intentionally created very different skin tones and painting strokes so that each would look as if they were done by a different artist. I wanted each 27 club member to have his or her own face and not mine. The only similarities will be the mat and frames and their hidden halos in each portrait.

sVA: With the nature of graphite/pastels and observing the sharp and crisp lines, the subtlety of tones between light skin and dark solid shadow, do you use special pencils and/or have you developed a special method to achieve this fine look?

JD: I use Rembrandt pastels only, and work on 30″ x 44″ BFK Rives heavy lithograph stock, which I purchase at Pearl Art in the city. Each painting takes about 40 to 50 hours, and when I think I’m done I will hang it on the wall in front of me while I begin painting the next one so that I can make changes and adjustments. I’m never really done, even when I have it framed.

sVA: What are the future plans for the 27 Club?

JD: I have a contract for a six week solo exhibition at VTICA, Vermont Institute of Contemporary Art, June 25 thru August 5, 2012. Half way thru this exhibition, I have organized a special weekend called, “27 – when the music began”, of 2 evening concerts and 1 matinee, featuring a live band and singers to perform some of the best songs of the immortal 27 club. I am also putting together a DVD about “27 – when the music died”, for show and submission to other venues in the future. Throughout my 45 year career as an artist, I feel that “27” exhibition will be one of the most important works I have ever done, and equal to the importance of my “Last Call”, installation which debuted at the John and Mable Ringling Museum, in 2001.

sVA: Do you have a particular favorite, if so who and why?

JD: My favorite “27 club” member would be Alan (blind owl) Wilson, was little known and appreciated, who founded the band “Canned Heat”. He was their song writer, lead singer, lead guitar, and harmonica player. His song “Up the Country”, was the unofficial theme song of the 1969 Woodstock festival, and background music, for the movie “Woodstock”. Both Son House, and John Lee Hooker, agreed that Wilson was the greatest harmonica player, ever. He was a dedicated conservationist, and slept outdoors as often as he could, to be closer to nature. I will forever regret not attending the Woodstock festival. Who knew there would be 400,000 people showing up! But I cannot end this interview without mentioning Robert Johnson, the very first member of the “27” who died in 1938 the very year I was born. He was a delta blues guitar player and singer who influenced and inspired the likes of Clapton, Jagger, Richards, Hendrix, Cobain, Mayall, Brian Jones, Fleetwood Mac, Peter Green, BB King and more. Without his influence there would not be the great rock music we know today