I’m drawn to the metaphorical potential of landscapes. Probing for implied sound or rhythmic amplitude in a scene, I imagine ways of enlivening the landscape with drama, creating a feeling. 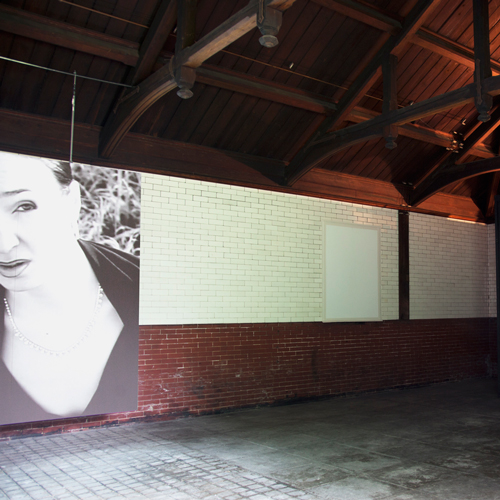 What does it mean to you to be an artist living and working in Sarasota, FL?

I just moved back here after a 17 year hiatus—I grew up in Sarasota and had the privilege of going to the old Pine View which was a city block of portable buildings clustered around a couple four-square courts on Bahia Vista. I’m sure this is still the case at the new campus, but the kids there then were astonishingly creative and interesting. Everyone was so badass. Being involved in some branch of the arts and being clever and precocious were expectations, nothing really unique. The school, along with the Ringling empire ever-present in the background, has made Sarasota symbolize something more rigorous to me that than the beachy vacation destination or retirement zone it looks like upon first glance, although I’m sure I’d feel differently if I were a recent arrival. But as a result of spending my childhood here, Sarasota has been more of a muse to me through distance and nostalgia than an actual studio location.

I’m hoping to change that now, though—to really get into it here, utilize the resources and take advantage of the way the visual and physical material here hits my consciousness. Florida is full of these amazing gestalts—the water, the sun, the swamp, the heat, the flora. These things are so gorgeous or fascinating but also so…stylized that they don’t seem like part of the reality we are supposed to suffer. I have a tendency in my work to balance soaring romanticism with an exuberant dose of kitsch, much like Florida seems to do by being its natural self: a pink and purple paradise filled with predators, swinging moss, and rock n roll. I’m really looking forward to going out shooting (video) and trooping around now that I’ve finally gotten organized.

How did you arrive at the structure of your work?

My work doesn’t have a certain structure. I use several overlapping strategies to get my work to occur such as pairing video with live performance, creating photo-essays, collaborating on sound recordings or live music, making sculptures… I’m interested in physical perception as a material, both in the making of the work and in the process of viewing the finished work. I dedicate myself to teasing out what I hope to be an authentic piece from the raw experience of a place, an action/ event, or a story or memory. I set myself up to projects that require a bit of learning, a bit of risk of failure. These are vulnerable states that carry through to the finished work. I guess a lot of my work is a bit emotional. They all have a little bit of sadness.

My breakthrough piece in graduate school was going to the Outer Banks for the winter and doing nearly nothing but driving through snowstorms on the beach in a 4×4. It was there that I realized that it wasn’t something that I could make work “about” but that being there was the work. I had to get the audience there to know it, to experience the immensity—not bring back a relic to show in a little white gallery. It was a real revelation at a time when I was trying to make formal sculpture.

What role does history play in your work?

I often develop projects based on places or events that I find interesting, like the project in the OBX I just mentioned. Researching the historical underpinnings of the subjects I choose to pursue is a key part of my early process. My studio is sort of a clean, library-like anomaly in comparison to a lot of other sculptors. I always start by reading and by sending emails to specialists and generally making an ass out of myself by traversing different fields, wondering if so-and-so can help my realize some vision. But, I try to leave the research behind quickly—I’m much more interested in imagination and getting something to evolve a result of the research. When there are significant historical facts associated with my subject matter or actions, I attempt to acknowledge and do away with them so I can get beneath the “obvious layer” into something more my own. So for me, history is something to absorb and get beyond. My job has to do with creating encounters and sensations.

Are there any features of your work that are discomforting, for yourself or your viewer?

I’ve never once been comfortable with a work, or even an idea. I think part of what keeps me excited to be an artist is that each of my projects have at various points scared the shit out of me, albeit emerge naturally out of my thinking. Sometimes I’m not sure if I’m making art, or how I get away with doing these eccentric things in the field like flying kites or dancing tango rather than tinkering in the studio with raw materials. When I do mess around in the studio, I feel like I am wimping out of something more real. So it goes back and forth between two kinds of discomfort. Someday I hope to show my studio objects, which I call “The Catalog of Ships” after the much-despised book II of the Iliad, that no one ever reads.

What aspects of contemporary art would you change, if you could?

Maybe if we had a culture that supported the arts more, we wouldn’t have to talk so loud and for so long to be taken seriously, and we could listen more. It so tiresome to constantly contrast each other’s accomplishments and plans and invitations for things. If we could be less competitive we could actually have a conversation. I find that when traveling abroad people listen so much better than we do here, and my theory is that the arts are taken more seriously there, art doesn’t need to prove itself because its just part of the good fabric of life.

I also wish young artists would write more critical discourse, or that there was more of a forum for art writing from young artists. I’d really like to know how artists themselves apply critical discourse to some of the work I see in galleries or fairs—a lot of things placed on shelves or leaning against the wall or carefully arranged in a montage or tableau with a stack of books on the side. I want to understand that stuff from a more critical standpoint than an aesthetic one.

Thanks to Jason Dehlin for allowing us to use his home.

One of the most complicated aspects of being an art maker is the “Life Work” balance: making important decisions on when to start and when to stop and where to separate things. Do you have any advice for other artists, based on your own methodology, on how to balance a life’s work?

I read a quote somewhere that I often remember when I am struggling to arrange my time: when a fan called out a request during a live concert Neil Young replied, “its all one song.”

One of the ways I manage the dichotomy of work and the rest of it is to try and make everything matter—all the things I do. Travel, writing, swimming on my masters team, reading books—its all towards something involved in an art-making lifestyle. This sounds very moony and self-help I realize, but I get very disappointed in myself when I am not in the midst of some project happening. I have to remind myself that the process of living and the process of working can be part of the same rhythm of productivity.

My heroes are artists who take on projects outside the confines of their studios, so that the projects require a huge dismantling of ones schedule or personal affairs. When working in the field you get to be 100% there, and its both exciting and terrifying—there is all this time pressure to get something to happen but yet it often seems like something natural and authentic is better able to emerge when dealing with elements of chance. You can’t force something because you have no control. You have to faith and concentration and patience and conviction. So I just work and read and travel and write and swim until I get to back to those moments again.

Jennifer Lauren Smith was born in Portland, Maine in 1979 and grew up in Sarasota, Florida. She attended Reed College in Portland, Oregon where she earned her Bachelor of Art degree in 2002. After graduation Jennifer moved to New York City where she spent several years working as a mural painter and cater waiter, and later, operated a bed & breakfast in Chinatown. Jennifer earned her Masters of Fine Arts in Sculpture + Extended Media from Virginia Commonwealth University in Richmond, VA in 2011.