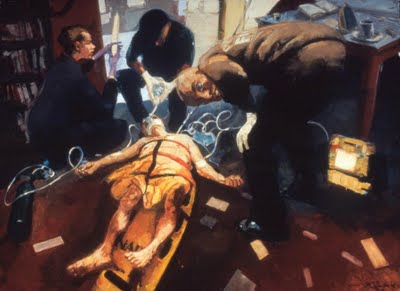 Henk Pander has lived in Oregon for 45 years, but to this day describes himself as a “reluctant immigrant” from his native Holland. He was born in Haarlem in 1937 and studied painting at the Rijksacademie van Beeldende Kunsten in Amsterdam from 1956 to 1961. Arriving in Portland in 1965, he observed the cross currents of the American cultural scene of the 1960s with the fascination yet detachment of a European émigré.

In the decades since, Pander has maintained his cultural double vision: he documents and interprets American technology, materialism, topography, and disaster in paintings and drawings that recall the grand tradition of Dutch painting extending back to Rembrandt and Frans Hals. At the same time, drawing upon his childhood memories in Holland and periodic visits to his home country, he frequently paints European scenes and subjects as well. His painted narratives range from his memories of Nazi-occupied Holland, to the NASA space center at Cape Canaverel, to the burning of the New Carissa off the Oregon coast. Combining personal and art historical memory with the subject matter of modern life, Henk Pander creates works that are profound in their seriousness, dramatic intensity, and expressive power.

One thought on “Henk Pander: Sees All, Paints All”