December 17, 2011 – April 29, 2012
This landmark exhibition brings to life one of the greatest civilizations in the history of the world, spotlights astonishing objects of every kind. 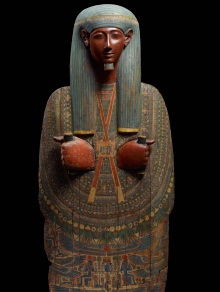 Mummy cases and sacred works in diverse media, tomb and temple reliefs, papyrus fragments, alabaster vessels, and rare objects comprised of precious stones make this one of the most dramatic shows ever presented at the MFA. The 100 works demonstrate the genius of ancient craftsmen, and the magical or spiritual qualities of the objects are revealed at every turn. The internationally respected Egyptologist Dr. Robert Steven Bianchi is the guest curator.

A magnificent red granite torso of Rameses the Great honors one of the most celebrated pharaohs in history. A large stele, or funerary marker, commemorates his son Rameses III. Other key works include a tomb relief of the nobleman Nefer-Hotep, a relief from the Amarna Period from a temple erected during the reign of the Pharaoh Akhenaten and his wife Nefertiti, and a fragment from a temple relief paying tribute to Alexander the Great.

A limestone sphinx is similarly impressive. The sphinx, with the head of a pharaoh and the body of a lion, points to the profound interrelationship of humans and nature in ancient Egypt. The natural world was not something apart for the Egyptians, and neither were the deities, who could take the form of animals and natural forces such as the sun.

Ancient Egyptian art centers on transformation, renewal, and eternal life. These objects were invested with visual and symbolic power. Hieroglyphics, the ancient Egyptian written language, were, by themselves, a high form of artistic expression.

The mummy cases or sarcophagi are the largest works in the exhibition. One is covered in colorful images— like a brilliant painting—and was designed to honor the status of an unidentified court official and to assure his eternal life. Another, more than six-and-a-half-feet tall, includes inlays of alabaster or limestone, as well as hieroglyphics, and has a monumental presence asserting the authority of a certain Hor-Em-Akhet. This impressive object was in the collection of French fashion designer Yves Saint Laurent at the time of his death.

“The Museum of Fine Arts, St. Petersburg is proud to bring these distinguished works of art to America,” said Museum Director Kent Lydecker. “The quality of the objects will be a revelation to scholars and the public. We are indebted to the Fondation Gandur pour l’Art, to Dr. Bianchi, and to our exhibition sponsors for making this extraordinary project possible.”THE MAGIC OF ANCIENT EGYPTIAN ART
Magic and spirituality infused every aspect of Egyptian art. Instead of providing a chronological survey, Dr. Bianchi has emphasized the objects’ sacred qualities. Priests accompanied the workers to gather natural materials and conducted specific rituals upon entering and leaving the quarries.

According to Dr. Bianchi, “for the ancient Egyptians, all stones were considered to be a privileging material, because they symbolized eternity, permanence, immutability, and incorruptibility…Any object created in stone or any text inscribed into stone remained intact and immune to the agents of time. Stone, possessed of a vital energy, was alive.” Statues of gods and pharaohs possessed their animating spirit.

In antiquity, expeditions to the Red Land—the desert, a place of chaos, evil, and demons—were ordered by pharaoh. The materials were returned to the Black Land—named for the rich silt deposited by the Nile—where the ancient Egyptians lived and thrived.

Craftsmen then converted these raw materials into fascinating and timeless objects representing cosmic order. The Black Land was the world of civilization, and the color black signified rebirth. These objects always had an elevated purpose and meaning, but they can be appreciated for their sheer beauty alone.

ABOUT THE MUSEUM OF FINE ARTS, ST. PETERSBURG, FLORIDA

The MFA at 255 Beach Drive N.E. has an encyclopedic collection of art from around the globe and across the centuries. The approximately 18,000 objects include important works by Monet, Gauguin, Renoir, Morisot, Cézanne, Rodin, O’Keeffe, and many others. Also on view are ancient Greek and Roman, Egyptian, Asian, African, pre-Columbian, and Native American art. The photography collection is one of the largest and most significant in the Southeast.

The Museum is open 10 a.m.-5 p.m. Monday-Saturday and noon-5 p.m. Sunday. Admission is $17 for adults, $15 for those 65 and older, and $10 for students seven and older, including college students with current I.D. Children under seven and Museum members are admitted free. Groups of 10 or more adults pay only $12 per person and children $4 each with prior reservations.