Ongoing
As the story of the Ringlings unfolds in this, the hundredth anniversary of their arrival in Sarasota, researching and examining the Asian art they selected can perhaps provide us with more insights into their artistic taste and collection development. 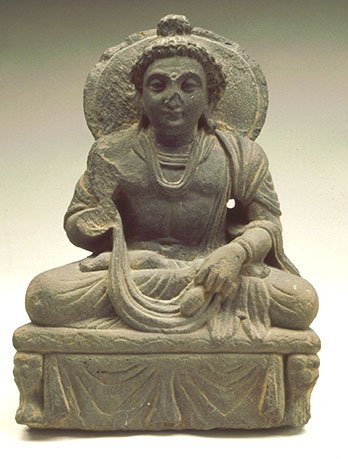 John Ringling was certainly not known as a collector of Asian art during his lifetime, nor does his popular legacy reflect this impression. Yet his appreciation for the spectacular, his discerning eye, and the guidance of his friends and fellow collectors all converged to create his relatively small but fascinating collection that can be counted among the treasures of his museum.

There can be no doubt, particularly after strolling though his art museum, that John Ringling favored large, flamboyant European art that somehow reflected his personality. His collection of Cypriot antiquities and his Asian art, however, provide evidence that he was willing to move beyond his major interest if there was good reason to do so. John Ringling’s Asian objects, some oversize, range from Japanese wooden carvings to stone sculpture from India. Some of these objects have not been on display for thirty years; others have never been shown to the public. Important in their own right, they were also essential as a means for John Ringling to expand the Museum’s potential to feature the roots and flourishes of the world of art.

In contrast to their European paintings, the objects the Ringlings acquired from Asia are sculpture or ceramics. Those in this new display, created from stone, metal and wood, illustrate the religions and religious beliefs of the region, as well as the region’s architecture and decorative arts. Some of these objects may have been a part of religious structures or temples. The information about their sources is provided where it is known; some of the objects remain more mysterious.

In his collecting, John Ringling emulated other wealthy entrepreneurs who also developed their own art collections, as well as selecting objects consistent with then-current collecting practices of major American museums. Asian art was just beginning to get serious attention by the museum community in the early twentieth century, and objects similar to these were acquired by museums and published in art newspapers, journals and periodicals. While there is little information on the reasons for the specific choices John Ringling made, we can assume that these objects were part of his vision for his legacy.

As the story of the Ringlings unfolds in this, the hundredth anniversary of their arrival in Sarasota, researching and examining the Asian art they selected can perhaps provide us with more insights into their artistic taste and collection development. Since the time of John and Mable, the Ringling Museum’s Asian art holdings have been enhanced by generous individuals. These gifts build on the kernel of John Ringling’s acquisitions, increasing the Museum’s collections as awareness of the importance of historical and modern Asia also grows. John would certainly be proud of what he started.