Barry Moser is a renowned artist, most famous as a printmaker and illustrator of numerous works of literature. 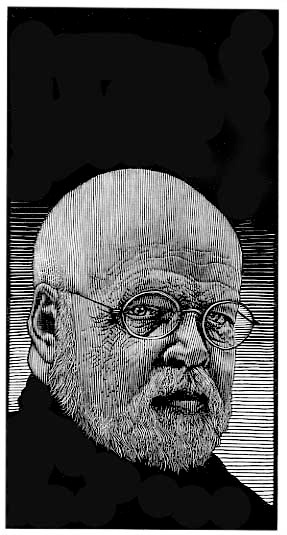 Born in Chattanooga, Tennessee, Moser studied at Auburn University and the University of Tennessee at Chattanooga, and did post-graduate work at the University of Massachusetts at Amherst. Some of his most celebrated work has been his illustrations forLewis Carroll’s Alice’s Adventures in Wonderland and Through the Looking Glass, each of which consisted of more than a hundred prints, and the former of which won him American Book Award for design and illustration in 1982. He has illustrated nearly 200 other works as well, including The Bible.

He currently serves on the faculty of the Rhode Island School of Design and Smith College. His works have been displayed in such places as the British Museum, the Metropolitan Museum, Harvard, and the Library of Congress. You can see his work at the Selby Gallery at Ringling College of Art and Design within the exhibit, “Fairy Tale Art: Illustrations from Children’s Books“.

1. Have you always created illustrations, or have you focused on other forms of art?

I came to illustration late. I was trained as a non-objective painter in college. After my undergraduate work was done I returned to subject matter and plodded along with my oil painting and trying various other media. I became interested in printmaking and tried to teach myself etching and engraving. And when, in 1968, I visited Leonard Baskin’s Gehenna Press in Northampton, Massachusetts I saw, for the first time in my life, hand-made books. It was a life changing moment and I fell in love with the form of the book. From there I became deeply involved with typography and printing, and only then did the idea of illustrating texts come alive. I was nearly thirty years old.

2. The majority of your work are prints from wood engravings. How did you come to the wood engraving method, as opposed to other methods of printing?

In 1958 I came across a black and white image in a magazine browsing the library at Auburn University in Alabama. It was called The Poet Laureate by Leonard Baskin. It took my breath away and from that moment I yearned to do black and white, sinewy images like that. But, unfortunately, I was too young as a freshman to take printmaking courses, and when I transferred to the University of Chattanooga there were no course in printmaking at all. It wasn’t until I met Baskin and his pressman, Harold McGrath in 1968 that I finally got the right tools and the proper kind of wood.

Wood engraving is an unforgiving medium and I like that. I enjoy working in materials that push as hard against me as I push against them. Most other printmaking media allow for corrections. Wood engraving (or relief engraving on synthetic material) does not–at least not willingly or easily.

3. What elements do you consider most important in your work?

The play back and forth between opposites is at the heart of my work: black & white; serious & comedic; complexity & simplicity; tradition & innovation; large & small; expected & unexpected; and so forth. It’s an ancient notion. Heraclitus was an early proponent of the idea in the 5th Century BCE.

In terms of illustration I always try to take a text beyond where it is on the printed (or typed) page, to add something extra-textual to the story. I also try to work against type, that is, if I am to see an old codger, I want to make that old codger something other than what you expect.

4. What is most challenging about being an artist / booksmith?

I have been involved, one way or another, in nearly 400 books. Some I have designed. Some I’ve designed and illustrated. Others I’ve written and designed, and so on. And you would think with that much experience I would have more or less absolute confidence in what I am doing. But the fact of the matter is that every time I start a new project I realize that I really don’t know what I am doing. As E.L. Doctorow said one time, I often feel like an absolute beginner and don’t know what I thought I knew. But, as Doctorow said, that’s the place to be…out there on the edge where it’s really scary.

5. You have been creating for quite sometime now, is there a particular daily routine you follow to get into the creative / design process?

I work everyday. I get up and I go to work. I have no truck with “inspiration” or any other such clap-trap. Work comes from work in my opinion, and so I work. Some days it comes really well, other days not at all. But, as Flannery O’Connor said, if I am not at my drawing board, those days when it would come well, would not come at all if I were not there working.

When I was working on the Bible project I was up at 5:00 am and was at my work by 5:30 or 6:00. Typically I knocked off at 6:00 pm. I did this seven days a week for fifty weeks of the year for five years. That’s twelve hours a day and that adds up to two 40-hour weeks in a single week. There’s a lot of inspiration in work.

6. In your experience, were there moments that you have struggled or had difficulty in coming up with a concept? If there are, how did you overcome your obstacles?

Rarely. As I said above, I am a plug horse. I do not sit waiting to be stimulated or inspired. That, I think, is the refuge of a lazy, jejune, and romantic mind. When Igor Stravinsky was asked where he got his inspiration he replied, simply, “At the piano.”

7. Which of your works reflect you most as an artist / booksmith?

The King James Bible, hands down. It was a huge, five-year long, daunting project, one which could easily go wrong in lots of areas and for lots of reasons, not the least being misunderstood. When one tinkers with Holy Writ, one walks on very thin ice.

It reflects my passion for doing really large and difficult projects in really difficult media. I was fortunate to be able to do it, largely through the beneficence of Bruce Kovner who funded it, and the likes of it are not likely to come around again, though I would love to get my teeth into The Canterbury Tales or Paradise Lost or even a complete Shakespeare.

8. What currently keeps you busy, and do you have any new upcoming projects?

My teaching at Smith College occupies two days of my week. Beyond that I am working on a book of lyrics by my friends Karin Bergquist and Linford Detweiler, a band known as Over the Rhine, to celebrate the 15th anniversary of their album “Good Dog Bad Dog.” I am also working on a new edition of Ovid’s Amores. On the horizon is a book with Barry Lopez, and a book for children called The Pomegranate Witch written by Denise Doyen with whom I did Once Upon a Twice. This week I will finish a book with patricia MacLachlan and her daughter Emily Charest. It’s called Tough Tom and it’s all about cats or varying personalities.

9. Viewing your work in a gallery is different then holding them in a book, what are your thoughts on how they are presented in such different situations?

I always make my images for the printed page–a surface that curves. In my mind they are never flat except when the book is shut. I do not design to be hung on a wall. So when I see my book work presented as gallery work it sometimes makes me a little uncomfortable.

Please provide anything else you would like to add.

My business is the business of making books, and in some instances– but by no means all– illustration plays a part in that work. And illustration, when it is done well, that is, when it transcends its medium and disappears into and becomes inextricable from the fabric of the whole book, is an art form that stands in close kinship with literature and theology and science.

Traditionally, illustration abets literature and poetry by establishing an interpretive visual environment that more or less parallels the vision of the author or poet by depicting and fleshing out scenes as they are described. Less common, yet immeasurably more effective, is the approach of throwing light on off-stage interludes, details, and asides that jump to the illustrator’s imagination as he or she reads the story or poem. Interludes, details, and asides that add new and unexpected interpretive elements to the reading—sometimes (as has been my experience) to the surprise and delight of the author. Either way illustration, really good illustration, takes the story or poem, the tract or treatise, from where it was, if you will, to where it was not.

You can see his work at the Selby Gallery at Ringling College of Art and Design within the exhibit, “Fairy Tale Art: Illustrations from Children’s Books“.