October 22, 2011 – January 1, 2012
The work of Berenice Abbott and Larry Silver, Between Shadows and Lights focuses on the remarkably similar career and aesthetic choices of these 20th century photographic pioneers. Separated by a generation, each turned her/his camera on the complexity of burgeoning American metropolises. 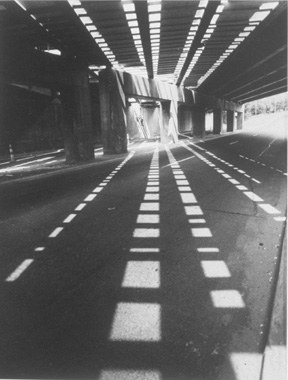 With the work of Berenice Abbott and Larry Silver, Between Shadows and Lights focuses on the remarkably similar career and aesthetic choices of these 20th century photographic pioneers. Separated by a generation, each turned her/his camera on the complexity of burgeoning American metropolises.

A native of Ohio, Berenice Abbott (1898 – 1991) began her photographic career in Paris in 1923 as apprentice to her friend Man Ray. Inspired by this connection, she chose to focus her camera at the outset on the Parisian writers and intellectuals of the day. She also became acquainted with the French photographer, Eugene Atget. His photographs attempted to make sense of a Paris in the midst of a transformation, and upon his death, she was instrumental in promoting his work by preserving his prints and negatives and arranging for publications and exhibitions of his photographs.

She returned to the United States in 1929 for a brief stay that resulted instead in a decades-long residence in the U.S. Settling in New York City, she was immediately seduced by the evolving urban landscape of the city: the modern juxtaposed with the traditional; the wealth with the poverty; and the new skyscrapers rising out of the deterioration of old neighborhoods.

She sought to create photographs that would document the interactions of urban life, including the diverse people and the places they lived, worked and played. Her desire was to capture the city in the same manner that Atget had interpreted Paris – imposing her love of facts and belief that “photography, a twentieth-century invention, was the only medium worthy of capturing twentieth-century New York.” Stylistically, her work explored contrasts, such as light and darkness, strength and decay, and present and past. 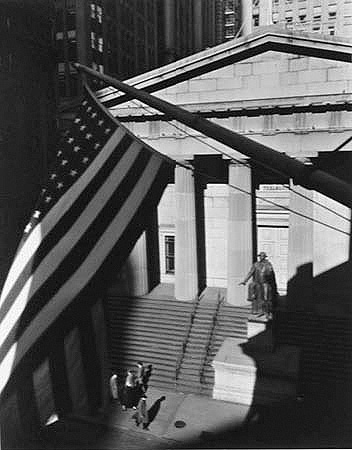 Larry Silver (born 1934) began exploring the streets and subways of New York at the age of fifteen, two decades years after Abbott had arrived. Born in the Bronx, Silver studied photography at the High School of Industrial Art in Manhattan. The school’s proximity to the Peerless Camera Store connected him to members of the Photo League, including W. Eugene Smith, Arthur Fellig (Weegee) and Lou Bernstein. Influenced by his environment and these other photographers, Silver focused on the relationship between the inhabitants of New York and the physical landscape of an evolving urban environment.