Sarasota Visual Art highlights seven airports where you can catch some art on the way to catching your flight if you are leaving from, or arriving into, Sarasota Bradenton International Airport. 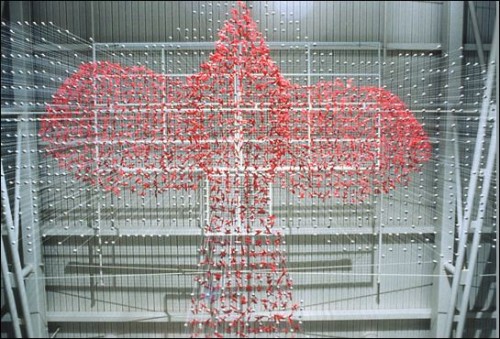 Rushing to catch your flight is standard airport behavior, but if you are flying with the other 2 million holiday travelers, you may find yourself standing in long lines, waiting for your departure, and experiencing lengthy delays. Although airports are not museums in the traditional sense, many airports display art- really good art, and surprising collections of art at U.S. airports offer a moment for reflection — for those who have the time.

Sarasota Visual Art highlights seven airports where you can catch some art on the way to catching your flight if you are leaving from, or arriving into, Sarasota Bradenton International Airport:

Four Large acrylic paintings by local artist Frank Hopper are displayed in the TSA security screening area, and four large pastels by local artist Regan Dunnick are displayed on the concourse by gates B7 and B8, as well as on the first floor; both groups of artwork were created specifically for the terminal rendering a distinct Florida and regional ambiance. Other airport artwork and display showcases can be found strategically throughout the terminal.

Permanent Exhibit, Art of the 60’s and 70’s, contains examples of work by several outstanding Florida artists and craftspersons, including some recognisable established Sarasota artists. Many of the outstanding professional artists represented in this collection were also teachers in Florida’s art schools, colleges and universities. Originally, the collection was purchased for display in the Airport’s administrative offices when the Landside Terminal Building opened on April 15, 1971.

While Hartsfield-Jackson’s Art Program offers numerous permanent and rotating exhibits of art and displays, one long-term exhibit stood out located on International Concourse E. Recycle Runway: Reclaimed Fashions is a collection of 18 couture fashions made from re purposed trash by artist and environmental educator Nancy Judd from Santa Fe, N.M. Judd’s goal is to inspire people in a fun and positive way to consider the possibility that “waste does not exist — only wasted resources.”

Judd’s trashique classic-style clothing is inspired by vintage designs and created from discarded and reclaimed materials. Each garment takes 50 to 400 hours to create and is made to last 100 years.

“The dichotomy of an elegant dress made from garbage is very intriguing,” Judd said. “I love the challenge of transforming trash into glamorous fashions.”

Visit www.RecyleRunway.com/ATL to take the full eco-quiz, perform quick e-activism, find resources, watch a video about this exhibition and share photos with friends.

Charlotte Douglas International Airport’s Art Program, Just Plane Art, includes over 20 permanent and rotating exhibits. Some of CLT’s permanent collection includes a 1/2 scale replica of the original Wright Flyer flown by Orville and Wilbur Wright on December 17, 1903 was installed on Concourse E, the airport’s regional carrier concourse, on December 12, 2003. In addition, a 15-foot-high bronze sculpture of Queen Charlotte can be found in the airport’s Queen’s Courtyard is located in front of the terminal. The sculpture, dedicated in 1990, is the centerpiece of the large plaza featuring a 40-foot reflecting pool not to be missed.

Of all the artworks exhibited in New York’s JFK airport, one is not to be missed. Known for his incredible ability to recall landscapes from memory after seeing them only once, and transferring that projection onto the page, artist Stephen Wiltshire sketched the almost picture perfect skyline of New York City which is now displayed at the JFK airport on a 250 billboard. .

Of the eight artists, Ralph Helmick and Stuart Schecter’s Rara Avis, a suspended sculpture visible from center of Ticketing Hall and Mezzanine Level, is an epic suspended sculpture poetically linking natural and manmade aviation. Comprising thousands of precisely suspended pewter elements, the artwork employs three-dimensional Pointillism. From a distance, the sculpture is a monumental cardinal, Illinois’ state bird. Upon closer examination, a perceptual shift occurs and the large avian form reveals a composition of over 2,500 small renderings of aircraft. Over 50 different aircraft are represented, ranging from Leonardo da Vinci–inspired designs and 19th-century balloons to classic passenger airliners and 21st-century spacecraft.

Displayed in Terminal E Baggage Are for Aer Lingus and Southwest Airlines, is the latest unveiling of the Massachusetts Port Authority public art exhibit with a photographic display of iconic images of Boston and the Bay State.

The exhibit is composed of three separate elements: 10 framed photographs of stops on the Freedom Trail, ranging from the golden dome of the State House to the Bunker Hill Memorial; 12 photo murals of cultural, historical and vacation landmarks in Massachusetts; and four display cases featuring the area’s four major professional sports teams, each of which has won a championship in recent years.