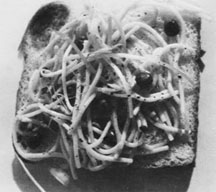 As an artist, naturally I read everything I can about art and everything related to it. Whether it is about theory, a movement, or a critics’ perspective it is all interesting, however what really fascinates me is reading about the personalities of the people behind the paintings.

One of my favorite pieces published was an article published by E.A. Carmean Jr. in 1981 called “The Sandwiches of the Artists.” The piece, by curator and canon E.A. Carmean Jr., was a smirking thorough glimpse featuring sandwiches in tribute to the century’s great modernists.

In Carmean’s detailed research on the eating habits of the artists, we learn of what ties these artists together: their expressed interests in sandwiches. For example, did you know that Gorky initially ate sandwiches like Picasso and Cézanne before coming under the influence of de Kooning and Miró, who introduced him to the pastry tube and thin spreads of condiments? Still, he was a traditionalist at heart, Carmean emphasizes. “Gorky continued to create his lunches in the nineteenth century fashion, by first making small cracker versions…”

There’s no free online version, but posted below is four of Carmean’s most delightful creations. There’re also sandwiches by de Kooning and David Smith, alongside photos of Motherwell enjoying lunch, Gorky and Breton brandishing bagged lunches and truffle forks on a picnic, and Rothko fretting on the telephone over the cost of liverwurst.

Finally, here is some food for thought: In 1948, Abstract Expressionists, Robert Motherwell, Barnett Newman, and Mark Rothko opened up a cafeteria called “The Sandwiches of the Artist.” “The name was Barney’s,” recalled Motherwell, “to point out we all used bread.”

To view a snip of E.A. Carmean’s The Sandwiches of the Artist visit http://www.jstor.org/pss/778376