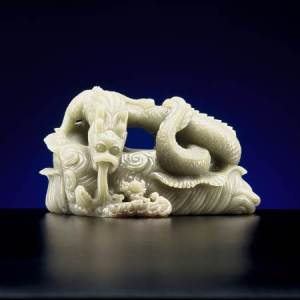 Jade has been shaped for human purposes for thousands of years. Receptive to delicate details and broad surfaces alike, jade was originally used by the Chinese for ceremonial objects, tools, and weapons because of its strength. Gradually it was valued for its aesthetic qualities, and it is still a prestigious material in Chinese culture.

Jade is a generic term for a very durable stone which has two varieties, specifically known as nephrite and jadeite. Its hardness makes it almost impossible to carve; instead, it must be worn away, abraded, and drilled, presenting challenges far beyond those faced by sculptors of more compliant materials. Natural veining is often incorporated into designs, taking advantage of the stone’s specific characteristics to complement the artist’s forms with variations in color.

This exhibition features objects that are a promised gift to the Ringling Museum from Dr. Helga Wall-Apelt. Fashioned chiefly during the late Qing dynasty (1644-1912), they reflect ancient traditions, though occasionally revealing a glimpse of a more modern spirit.