300 Words by Joan Altabe, a second part to a previous entry. 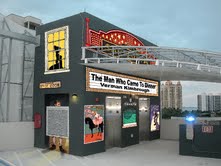 First, to clear up any confusion, the proposed garage murals will be painted inside, not outside. No matter. Painting within is no less objectionable than barging in on the sail forms without. Only the reason is different. Commissioning art for spaces where cars are housed is an effrontery to art, not to mention artists.

Not that parking garage paintings are new for Sarasota. In 2001, murals appeared in the deep bowels of One Sarasota Tower’s garage. They were so unexpected that I likened them to discovering the caves of Altamira in northern Spain; except instead of bison and reindeer, the walls – from basement to first floor – were covered with geometric abstractions that came off more like festooning than fine art.

When I think of murals as art, I think of Sarasota’s Skip Dyrda, who has been hired to paint in the Palm Avenue garage top floor. He deserves better – my complaint, not his. In these hard times, an artist is glad to get work.

You may remember Dyrda’s work on the east wall of the Mediterraneio restaurant on Main Street – a 60-foot-high, 90-foot-long mural painting so photo-real that you thought what you saw was actual. The illusion included make-believe balustrades and two towering archways through which you could see Sarasota’s lost treasures — the John Ringling Towers and the Bickel House.

The see-through arches were reminiscent of Richard Haas’ landmark mural on Miami Beach’s Fontainebleu Hotel. Like the hotel mural, the one on the restaurant building transformed a blank wall into a field of vision full with icons of Sarasota arts and circus history. Dyrda’s painting was so skillfully rendered, I remember mistaking a worker he pictured on a scaffold for a real person and parked my car to go talk to him.

Now consider Dyda’s aim for the Palm Avenue garage. His assigned theme is theater, but rather than imaging some generic image, he plans to showcase The Players Theater, owing to its history as the oldest community theater in Sarasota (and the 2nd oldest in Florida). And he will note on the marquee a play that showed in the theater’s early days – “The Man Who Came to Dinner.”

Are you getting this, Sarasota? We call ourselves an art town. Yet, while blank walls abound in our streets, we’re willing to stuff such thoughtfulness and talent in a garage.

Heck, even Punta Gorda, which has no illusion about being an art mecca, boasts a mural society that paints the town with its history.