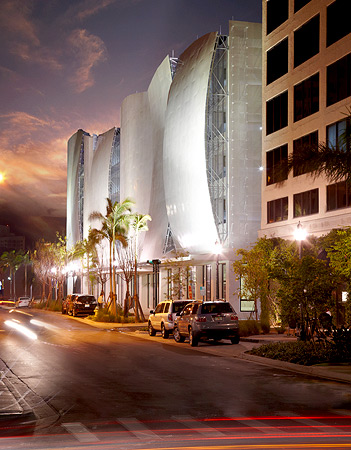 You’re not going to believe this, coming from me. You don’t always need
public art.

I know, I know: For years, I’ve railed that there’s not enough of it around
here. But I learned something a while back. I got the lesson from a
North Port ordinance that says 1 percent of the cost of construction for
government buildings goes for public art.

Northport also rules that its government buildings be designed in Old
Florida Frame Vernacular. That’s the style with the pioneer homestead
look, the one that Marjorie Kinnan Rawlings lived in at Cross Creek –
unadorned, with steep roof and deep, overhanging eaves – a style that has
everything to do with fresh air and nothing to do with embellishment.

The lesson of North Port teaches that art in architecture is not always a
good idea. It can detract. It can be overkill.

Enter the new Park Avenue Parking Garage and the notion to paint murals
on it. The building doesn’t need art. It already is art. With its aluminum
sails attached to the exterior, the garage is sculpture the way the Sunshine
Skyways is with its triangular-shaped cable stays that also suggest sails.

Sarasota City Commissioner Paul Caragiulo had it right at first when he
nixed the murals, saying, “I’m a huge fan of this building.” I took that to
mean he liked it the way it was. He changed his mind when the garage
designer pushed for the murals. Caragiulo said, “I was going against what
two designers of this building saw as something that makes their building
complete. I’m not an artist. Who am I to say it doesn’t work?”

But the garage architect IS and his blindness to his artful garage is
inexplicable. Even despite likening his building to a cruise ship Jonathan
Parks told the commission his garage is an unfinished piece. “You trusted
me to get it this far,” he argued, “I can present a canvas for the artists to
make it successful … The artwork will say, ‘This is Sarasota.’ After we get
this done, it will be a finished piece.”

Mayor Suzanne Atwell makes no sense, either in her zeal for the murals,
saying, “I think this will breathe life into this gorgeous building.” If it’s
gorgeous, why not leave it be gorgeous? Why laden it with, count them,
FIVE murals, each on a different subject and all on the same building.
(Ugh).

One thought on “Don’t do it, Sarasota!”