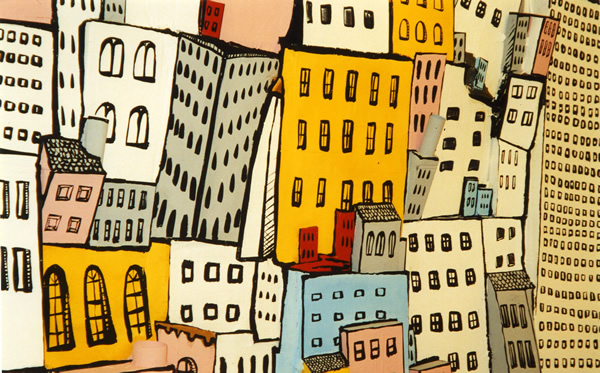 About the Artist:
Erik Groff produces site specific works of art using exclusively discarded materials accumulated in the vicinity of the location where the work is to be exhibited. The scale and medium employed to create each work thereby seeks to reflect the unique consumption and disposal habits of the population around a given site, while simultaneously creating a unique work of art that focuses on the experiential.

By exploring the paradigms of reuse, deification of capital and a society locked into ever deepening cycles of overconsumption, Groff reorients his creativity toward furthering the cause of art, rather than that of finance and the product driven. The result is an art which seeks to bridge the void between ’respectable’ gallery art and art made from discarded materials.
http://www.flickr.com/photos/67673272@N08/sets/72157627684033012/

About Mark Lombardi:
Mark Lombardi (1951-2000) was born in Manlius, New York. He received his BA in art history at Syracuse University in 1974. While still an undergraduate, he was the chief researcher for the art exhibit Teapot Dome to Watergate, the elements of which focused on various governmental scandals. This project exposed Lombardi to volumes of information, and gave him experience in aggregating and collecting those masses.

In the early 1990’s, Lombardi felt inspired to independently research the many corruption scandals of the time, including the BCCI conspiracy and the Iran-Contra scandal. In order to deal with the overwhelming amount of information, he began assembling his findings into physical outlines and handwritten diagrams which he eventually called Narrative Structures. At first glance, these large-scale drawings resemble celestial maps; however, closer reading reveals the intricate web of connections that detail the networks by which the ruling class continues to misdirect the evolution of entire societies on behalf of their own interests.

Interestingly, the conspiracies he researched were not a completely abstract pursuit; the husband of a former classmate was involved in one of these scandals; when he disappeared, the only portion of his body recovered was his jawbone. In March of 2000, at the height of his success, Mark Lombardi was found hanged in his Brooklyn, New York apartment.